Can we talk about the economics of sex?

It’s time for another edition of the Bare Marriage podcast, and this week we’re talking about how to have more sex!

I hope you all will listen to the podcast and consider this extras. I like to leave more things to read based on what I said on the podcast. So, without further adieu, give this a listen:

Main Segment: Why Aren’t You Having More Sex?

I’m a huge fan of Economics 101. As I explained in the podcast, I took it three times in my life, and then I taught it to my girls, too, when they were taking online university courses.

One of the concepts that I find really helpful is the relation between demand and supply. Now, for our purposes today, you don’t have to understand all of it. But here’s the jist:

Sex is going to get more expensive (or harder to get) if the individual ingredients that make sex possible become harder to get. And when things are harder to get, you don’t get as much of them. In other words, you have less sex.

I’ve explained this in detail in this post on Economics and Sex. And I made this horrible graphic that tries to explain what happens when the “price” of everything that goes into sex goes up. You get less sex! And then this week I was talking about 10 reasons you’re not having more sex.

Of course, the main reasons are always libido issues, or relationship issues, or trauma issues, and things like that. But I’ve talked about those a lot. And today what I want to show you is that sometimes it’s just a lot more mundane. It doesn’t mean that there’s anything particularly sinister going on, or that we’re broken, or the relationship is broken. It’s just that life is getting in the way. So what can we do to stop that from happening?

That was the focus of our challenge this week!

Take a look at the 10 reasons you may not be having sex, and identify 1-2 to tackle. Have your husband look through the list, too! 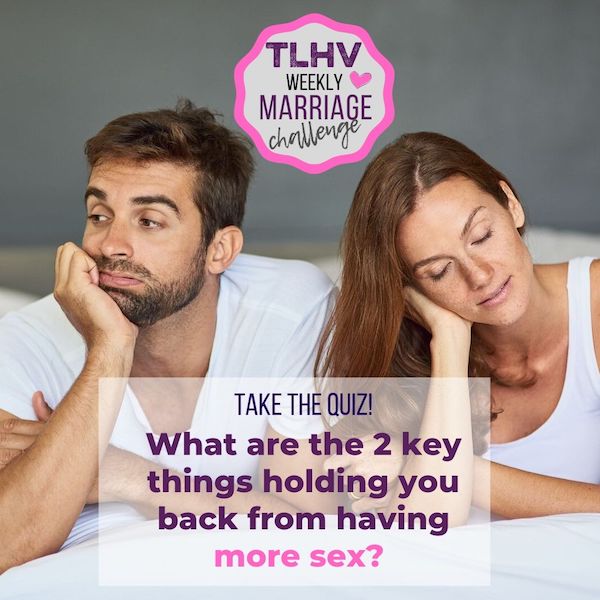 Reader Question: How Do We Stop Life From Getting in the Way?

Rebecca and I dealt with two quite similar questions about how to keep the relationship alive when life is just busy. Here’s the big one that we tackled:

Right now my husband and I are having a hard time spending time together. We have been married a few years, and together for a little longer. We have two kids under 2 and then an older child. Our sex life before was amazing but now our living situation has us with my in-laws. My husband works and my daughter goes to school more than an hour from the house so they have to get up and leave the house by 6 and I often don’t see him again until after dinner. So when my husband and I get to talk its usually on the phone, there are days that we want to be intimate and plan to but by the time we are able to we are just too tired. We know we love each other and we talk about it but we are struggling to get that time. So how can we get to enjoy each other’s company without all the distractions?

We went into a lot more detail in the podcast, but I’ll say two quick things here: You can put up with anything if there’s an end date. But if there’s no end date, make one. You can’t live like this for an extended time. Maybe it means you re-evaluate what you want out of life (as in where you live, or what you do for work), but this has to change.

The second thing which may not relate to this woman in particular (it depends WHY her child is going to school so far away) is that you don’t have to sacrifice your life for your child to have a perfect life. It’s okay for a child not to have a perfect life if it means you don’t have a miserable life. I know a lot of parents who sacrifice everything for one child’s happiness, but then the family loses too much. The family matters, too, which is what I was saying on Monday on our post about kids’ schedules and extracurricular activities.

Comment: Yes, men are responsible for sexual assault. But women should still learn to minimize risk.

When I published the post last week about 10 tips to teach a daughter to stay safe from sexual assault on campus, I had a number of people tell me that the way to prevent sexual assault is to teach men not to rape, period. We shouldn’t be putting the burden on women.

In theory, I agree, which is why I started that post with that hilarious Twitter thread about putting the onus back on men.

But at the same time, that’s simply not going to happen. You can’t educate evil out of people. There will always be evil people around us. And so I think it’s much better to teach basic things to help minimize (though we can never eliminate) risk. That doesn’t mean you’re responsible if something happens. But to say, “I’m not going to teach my daughter anything because it shouldn’t be her burden to carry” may be politically true, but personally, I would rather my daughter stay safe.

Politics is one thing. Real life is another. And we live in the real world, even if it’s ugly.

So that’s it for the podcast today. Please listen in, and if you like it, leave a 5-star review and subscribe, because the more people review it, the more will listen! And let me know: Do you think it’s fair to address sexual assault prevention at girls, too? And what do you think of my economics and demand and supply (because that was fun to record!). Let’s talk in the comments!

← The 3 Kinds of Marriage Problems--and Why We Shouldn't Confuse Them Do Only Christians Have Good Marriages? →