MENDED: How to Repair Your Marriage Before it Breaks The secret to a great marriage is to fix problems before they start.

It’s just being intentional–and it’s making those small choices that we talked about yesterday that can become turning points in our marriages. We decide to move towards each other, instead of apart from each other.

That’s what we’re going to be talking about for our series in April. On Wednesdays I like to develop a particular theme (which I often carry over into my podcasts) and this month I’m going to look at how we can be intentional in the little things to build intimacy. It’s going to be a super practical month, and hopefully a fun month, and I’m looking forward to it!

To set the stage, let me tell you about a book I recently read called Mended: One couple’s journey from betrayal to imperfect beauty. It tells the real-life story of Rick and Tiffany Bulman, who, 20 years into their marriage, found themselves dealing with an affair. Instead of throwing in the towel, they both fought to keep their marriage together, even though that process revealed some awfully painful truths about both of them. As they faced those truths head-on, they were able to find real healing. I really enjoyed the book. It was raw, and it was real, and it didn’t try to minimize the pain or devastation that the affair brought. But more importantly, it told the story of how a marriage ended up that way, and how it recovered from it. It showed how Tiffany had to repent of the affair, but then also how they had to start from scratch to rebuild afterwards.

Here’s just one example: Early on in their marriage, Tiffany asked her husband to check the windows and doors before they went to bed to make sure they were locked. He brushed her off, thinking she was silly. He had grown up in the country where nobody locked their doors, and it just wasn’t a big deal to him. Tiffany, on the other hand, grew up with a dad who always checked everything every night, and it made her feel secure. When Rick allowed Tiffany to check the windows and doors every night, it made her feel unprotected, like he didn’t care about her safety or the boys’ safety, and that their safety was all on her head. That went on for years, and it was only in counseling after the affair that she was able to share how unsafe she felt and how unloved she felt. Many, many tiny incidents like these blew their marriage apart before the affair started.

The message of Mended is that, if you want to rebuild after an affair and after the repentance has happened, both partners have to see what they have contributed to cause the drift, and both partners need to deal with their stuff and commit to oneness. When only one partner has really hurt the marriage (and not all affairs are caused by two parties doing awful things), then the dynamic is different, and the book may not be as applicable. But where a marriage has been growing apart for years, this is a great book to look at how affairs do not need to mean the end of the marriage, and I highly recommend it.

But what I really want to talk about is something bigger:

How could they have prevented this drift in the first place?

This couple spent 17 years growing apart before Tiffany strayed. Is there something that could have been done earlier? Obviously Tiffany was still at fault for the actual affair, but could they have prevented the drift?

In Mended, Rick talks about all the things that he could have done: he should not have been a workaholic, and he should have put his family first. He should have realized how Tiffany felt loved, and talked to her more about why it was that these small gestures mattered to her. He should have learned his love language. All of that is true.

What I want to do, though, is to take the story in another direction, and ask, “What could Tiffany have done when her husband wasn’t considering her needs, was taking her for granted, and wasn’t engaging at home?”

I went into all of this in great detail in 9 Thoughts That Can Change Your Marriage, but here are just three things that can help in this situation:

Tell your husband what is important to you–repeatedly

This doesn’t lead to oneness; this leads to brokenness and distance. Intimacy can only grow if the spouses understand each other. If something is important to you, you have to make that clear. Sometimes we say something once, and our spouse doesn’t get it. It’s so far out of their realm of understanding that they don’t think we’re serious. So we need to push through. We don’t have to be mean about it. But we can say:

“Honey, I asked you last night if you would check the locks, and you thought I was being silly. That hurt me. It may not be important to you, but this is very important to me. When you don’t check the locks, I feel unsafe. Even if you think it’s silly, can you start checking the locks for my sake?” How to Talk So Your Husband Will Hear My Husband Doesn’t Understand Me

For years, Tiffany felt alone and unloved. But she didn’t speak up. Instead, when she got to a breaking point, she would react in anger, yelling at Rick.  Reacting in anger is actually quite common, because anger is an easier emotion to express than hurt, or loneliness, or insecurity. When we don’t express what we’re really feeling, though, we can never be intimate, because we can never really “know” each other.

Those deep hurts, when not expressed, cause our spouse to know less and less about us, because they have no idea what’s happening on an emotional level. That causes real breaches in the marriage, even if you think you’re doing everything not to rock the boat. Be a peace-MAKER, not a peace-KEEPER! 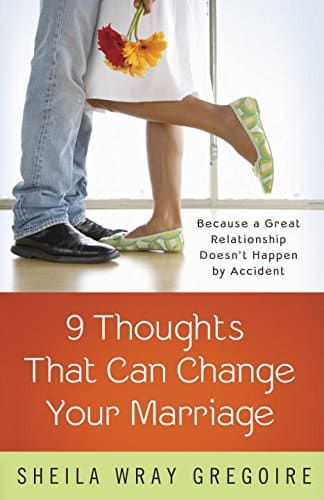 Here’s the final scenario in their marriage that I’d like to dissect and offer a different solution.

It’s a potluck lunch after church, and Rick is making the rounds talking to everyone and being the life of the party. Tiffany is trying to manage four kids on her own–getting them food while also trying to get her own; trying to make them sit at the table; making sure they eat; stopping them from running all over the church or fighting. Trying to do all this while Rick is oblivious to it makes her infuriated, until she finally picks up a kid, throws him at Rick, and yells at him, “It’s your turn now!” Is there a better way of dealing with this?

Some may say that she shouldn’t take such extreme action. Here, however, is how I see it:

Childcare is not a chore; childcare is a relationship building activity. If one spouse does not spend any time with the responsibility for the kids, then those kids will suffer.

When our children were small, I did all of the housework because Keith was working 100 hours a week in his residency in pediatrics. But when he came home, he was fully engaged with the kids. Often he would take them so I could have an hour to myself. That’s what a parent does. For the emotional health of all involved, but especially for the kids, parenting cannot be entirely on one spouse’s shoulders. And that’s why I would have chosen this issue to draw some clear boundaries and give limits on what I was willing to do.

Sometimes we believe that there’s nothing she can do when he’s not caring for her, but that’s not true.

What we really mean is that there is no magic formula that will make him suddenly start acting the way that she wants him to act without her having to risk speaking up or acting differently. Many women (and many men) are waiting for their spouse to suddenly change, but aren’t speaking up and doing the things that may most motivate that change. The more that we all speak up about little things, the more we will stop getting into destructive patterns. And the more we start setting limits on what we’re willing to do, the more we allow our spouses to feel the consequences of their actions.

I’m painting this as a negative thing, perhaps because I was thinking about it in terms of this book about affairs. But speaking up and drawing boundaries are not negative things, but positive things. They don’t have to be done in anger, and they do build intimacy. They aren’t antagonistic towards the spouse; it’s actually loving to try to build oneness. Here are some other series for you to read: Is He Your Type? MBTI Personality Types and Marriage Our Submission Series: What Does It Mean to Obey Like Sarah? Which Birth Control Method Is Right For You? A Pros and Cons Evaluation of Them All! Men are Visual: But Does That Mean That All Men Lust?