10 Ways to Talk So Your Husband Will Hear 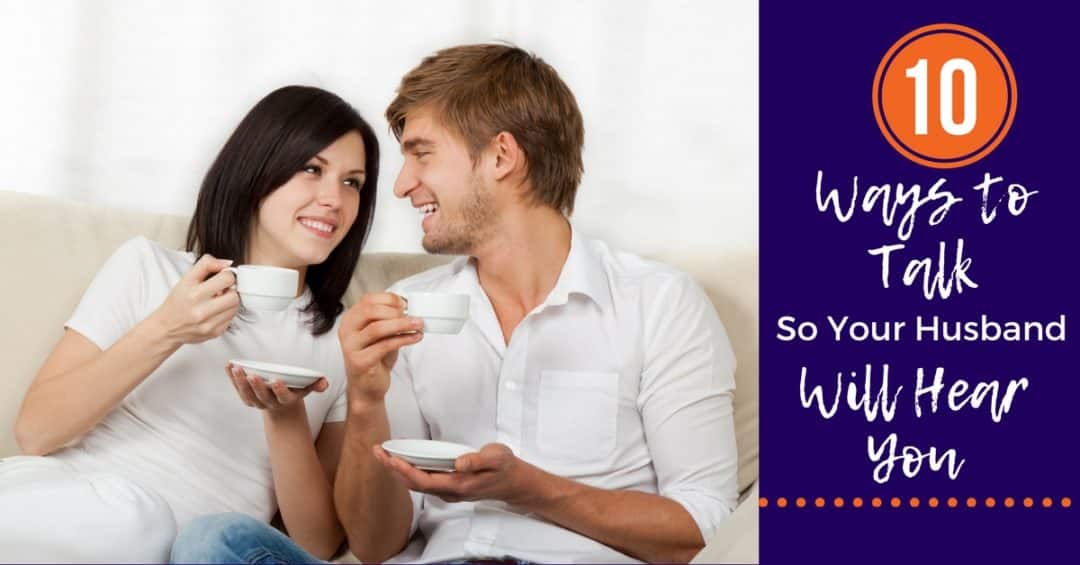 Feel like your husband doesn’t listen? Maybe you just need to learn how to talk so he will hear!

This week at To Love, Honor and Vacuum talking about how to talk so that he can listen. Last week I wrote a post on what to do when your husband refuses to talk about something important, and so many people asked for follow up that I’ve decided to dedicate this whole week to it!

Yesterday I looked at how to begin with the right foundation–make sure you’re at least letting him know what you need if you feel like he doesn’t understand you.

Now we’re going to assume you’ve done that–but he still doesn’t seem to be hearing. Now what do you do?

Today, for Top 10 Tuesday, I’m going to give you 10 tips on how to have fruitful conversations so that he CAN hear you! 1. Try Talking Side by Side

One reader wrote this:

Looking into someone’s eyes is very vulnerable, and can be uncomfortable. It’s often easier to have difficult conversations while you’re driving or while you’re in the dark!

2. Set up a regular connection time

The scariest words to a guy are often “Honey, can we talk tonight?”

But if you have a regular time when you already check in and chat about the day, then it’s not as intimidating. Try taking 15 or 20 minutes everyday and sharing your highs/lows. That helps you feel understood, and helps both of you feel connected. And then you have a natural time to bring up other things if they need to be discussed.

3. Respond to HIS cues

Start listening–and probing–when your husband opens up! When he starts to talk about something important, make it a habit to ask follow-up questions so that you draw him out, help him to process his own thoughts, and help him to feel understood.

For instance, if he says, “what a busy day today! Totally stressful.” You can ask, “oh, no! What happened?” And as he tells the story, keep following up with questions. Then, after that, it’s often quite natural to start sharing some of your own frustrations.

4. Ask him his long term goals

Sometimes we get so caught up in our own version of what makes a great marriage that we forget that he may have a different one! Ask him what he wants the marriage to look like in five years. Ask him what he wants the kids to know in five years. Brainstorm together about your goals, and then you can start asking, “okay, if that’s what we want, what are we going to do to get there?” Problem solving mode is a healthy conversation model–and often quite a fun one.

Want more help with this? Download my visioning together printables!

5. Ask him what he feels about the situation

Don’t rush in and give him your whole opinion and analysis of the situation. First ask him what he thinks, and really listen. This doesn’t mean that your opinion isn’t important, or even that it’s less important. It’s just that often we’ve put a ton of thought into something that wasn’t even on his radar. If we begin the conversation and say everything that we’ve already thought about it, we run the risk of steamrolling him.

Instead, let him talk and give his ideas before you unload everything you’ve been thinking.

6. Want him to listen to you? Ask him what’s most important to him!

Let’s say that you’re really super frustrated because he never seems to be fully “there” when he’s at home. So you feel like he doesn’t care about you (or maybe even the kids).

You could launch into a conversation about how much he’s disappointed you. But honestly, that’s not likely to result in him listening to you well or you feeling heard, because it will sound like an attack.

But what if you could find a win-win?

I feel sometimes like you’re not fully here when you’re home, and that makes me sad, because I want you to feel like home is really a haven. So what are two or three things that I can do to make our home feel more like a haven to you?

And after you’ve talked about that, then you can say, “Great! Let me start to do that. Now, here are two or three things that would really help me: how about if every night we spend 20 minutes having a cup of tea together and talking about our day? Or how about you do the bedtime routine with one of the kids every night, so they have special Daddy-kid time?” What if you’re having one of these conversations, though, and your husband comes out with something that’s really hurtful?

One woman wrote this last week:

Similarly, as a wife who often doesn’t want to talk because lately my husband seems to discount my opinions on the little things so how can I trust him to have a real conversation? When I tell him what I want for Christmas and he rolls his eyes and thinks it’s silly, it hurts, but it’s bearable. If I tell him how I feel about something important and he has the same reaction, it breaks my heart. :-(. I’ve told him this a hundred times, but he still doesn’t get it.

Explaining that you’re hurt isn’t working. But let’s back the truck up a second.

Let’s say you explain how you’re feeling and he rolls his eyes. You can feel hurt and explain how he’s made you feel (and you’ll likely be emotional while you’re saying this), or you can say this:

I notice that you’re rolling your eyes. That gives me the impression that you think what I just said is silly. Do you think I’m being silly?

Before you accuse him of thinking you’re silly, then, just check in with him if this is what he does think! Chances are he’ll say, “No, I’m sorry if I gave you that impression,” and he’ll realize that he had just been impolite.

Here’s a strange dynamic that often happens with men and women. When women ask for help, we often feel guilty. And so we need to show that we actually do need help. It’s how we ask our friends–“I need to run Jenny to the doctor’s appointment and at the same time Jeremy needs someone to walk him home from school. I’m so sorry to ask, but do you think you can walk Jeremy home tomorrow when you pick up your darling Michelle?”

But if you talk like this with your husband, it can sound a little insulting. “I’m trying to make dinner, honey, but it’s really hard because Jeremy is talking non-stop and Jenny is crying. Do you think you could just talk Jenny off of my hands, just for a minute, while I try to get dinner on the table?”

That sounds perfectly reasonable to us. But many men, when hearing that, will simultaneously hear a guilt trip.

How could you not notice that I am trying to get dinner while YOUR two children are driving me nuts? How can you not hear your child crying? Why are you still on your butt on the couch and why haven’t you come and helped me yet?

There’s an easy way to avoid this. Just ask with no frills:

Honey, can you take Jenny for me, please?

When we justify every single request, it can actually sound like a criticism to him, even if we didn’t mean it that way, and it can take a simple, everyday situation and put a negative spin on it.

9. Talk about what you need, not what he’s doing wrong.

Let’s say, for instance, that you’re married to someone who plays video games six hours a day, often not coming to bed until the wee hours of the morning, and not getting enough sleep.

You could lecture him on video games.

Or you could say,

Honey, I feel as if we’re not connecting and I’m feeling really lonely. I miss going to bed with you every night, and I miss making love to you. Can we talk about how to help me feel less lonely and more connected to you?

It’s just a different dynamic. And remember–guys tend to like to fix things. So if you present a problem he can fix, that’s often better than presenting a situation where he’s doing everything wrong.

Finally, sometimes it’s time to stop talking and start doing. The original letter writer who started this whole conversation had this problem: Her husband had no clue how the female body works when it comes to sex, and wasn’t interested in pleasuring his wife at all. Sex was rough and not arousing at all.

Talking to him wasn’t working.

And in this situation, sometimes the best thing we can do is to say:

I so want to enjoy a great sex life with you, and I do want to make love! But I’m not willing to do that until we start learning how my body works and focusing on making sex for both of us.

I write more about this for frustrated women on this post, “Is this the last straw?” Sometimes we’ve talked so much and bent over backwards trying to win him with kindness and it isn’t working, because people don’t change until the pain they feel from not changing is greater than the pain that change will bring. It’s called boundaries; we need them, and sometimes setting a clear boundary will do more than a multitude of words.

So let me sum up, and then tell you what we’re going to tackle tomorrow:

Tomorrow we’re going to talk about the biggest revelation I’ve ever had about resolving conflict–it changed everything!

But for today, let me know: what one of the ten points really spoke to you? Or what one do you have the most trouble with? Let’s talk in the comments!

← When Your Husband Doesn't Understand: Is It Your Problem or His? How I Learned to Stop Giving the Silent Treatment in My Marriage →