Is Having the Husband Make the Final Decision a Harmful Shortcut in Your Marriage? 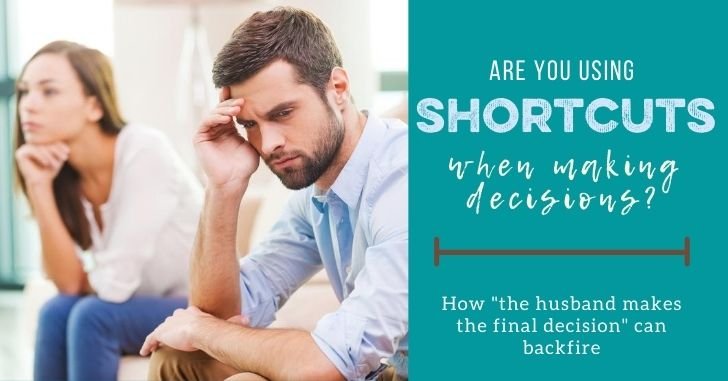 When we give husbands veto power, do we end up damaging intimacy?

Often the best conversations on this blog don’t happen in the posts themselves, but in the comments. And today I wanted to share a comment that came in on one of Keith’s earlier “men’s corner” posts about making decisions–plus another comment that I’d never noticed before that was on that same post!

I think the post got noticed again because this week Keith chimed in again with his post on seeing sex through a female lens, and then people followed rabbit trails!  But on that earlier post about decisions, Terri wrote:

I’ve heard this teaching all my life too, that somebody has to make the final decision. My two cents’ worth from my own experience: There are other types of partnerships besides marriage, and in no full partnership do they give one partner the permanent, unchanging, back-pocket Decision-Making Badge. A business partnership between two people, for example. Somehow they manage to come to a decision when one must be made — because they have to.

While a marriage is not a business partnership, the similarities do extend here. Two partners needing to come to agreement CAN do so — unless they themselves have decided on the shortcut of granting one of them the decision-making badge. Then there’s less pressure and less motivation to come to agreement. It’s a shortcut.

Pairs of adults make decisions together all the time. Marriage partners aren’t special or unique in needing to come to agreement and make hard decisions with people they don’t agree with from time to time. I believe we need to not excuse ourselves from the sometimes hard effort of working through decisions rather than simply offloading the work and responsibility on one spouse and excusing the other from work or responsibility in making hard decisions. (And I believe it would be a lot less hard if we pursued understanding rather than compliance! Which we tend to do.)

Let’s Look at The Evidence: Do Marriages Work Better When the Husband Decides?

When we give someone the right to make the final decision, we do provide a shortcut

I think she’s absolutely right. When discussing this concept of decision-making, I often hear people telling me, “ah, but without someone to break ties, you’d always be at an impasse!” And they look proud when they say this, like it’s a trump card.

If people are so sure they need a tie-breaker, chances are they’ve lived their lives taking shortcuts and have never done the real work of finding a solution.

If you’ve never done the real work, you don’t realize it’s possible. And that’s the problem with giving people a shortcut: when the first sign of difficulty hits, it’s easy to just say, “Okay, well, I’ve got to make the decision then”, and march off in whatever direction he chooses.

But what if, by wrestling it out together, they found a different solution that neither had ever thought of before? I show how this can work in detail in 9 Thoughts That Can Change Your Marriage (it’s thoughts 6&7!), but quite often doing that wrestling opens doors. Do you have a hard time asking for what you want?

You can change the dynamic in your marriage and make talking about your own needs easier!

If your marriage is in a communication rut, it’s time for some change.

And while providing a shortcut is definitely a problem, there are a few other things I wanted to bring up.

For instance, let’s say that she’s feeling unloved because he’s spending a lot of time talking to his mother, and shares more with his mom than he does with his wife. She brings this up. But because he is the final authority, he tells her that she is wrong.

In fact, in that list of 98 ways you can sin against your husband that was given out by biblical counselors, one of the ways women can sin is by “getting my feelings hurt too much.” So feeling unloved and not liking something your husband is doing is now framed as a sin, rather than as a marriage dynamic that needs to be looked into.

Then there’s one more perverse outcome to this idea, and it’s that if the way a woman submits is to let her husband decide when they disagree, then if they were to agree, she’d have no chance to submit and do what’s right. Therefore, disagreement and being in disunity is the only way to fulfill your proper role as a wife (similar to how Debi Pearl wrote about as we talked about on Tuesday–you give up your rights and what you want).

I’d suggest that what God wants for couples is us wrestling together to seek out His will, and us understanding that in marriage, we have another person to help serve as a sign that we are hearing from God–or not hearing from Him. And in marriage, we are to excel at giving to one another and serving one another, and finding unity in the Spirit, not just doing what a husband wants.

Anyway, you can read more of Keith’s original post about how the evidence doesn’t support husbands making final decisions, but it’s my prayer that we can work towards marriage which is Jesus centered and not husband centered.

(If you haven’t read it yet, jump into my submission series to see more!) While I was pulling that new comment to highlight this week, though, I saw another comment there by Maria that I had never noticed before, that I also thought was really insightful.

Let’s say that a wife and husband are going for a stroll together, when they see a casino up ahead. Neither has a gambling addiction. Both can easily say no to the casino. And they should. The budget is tight. Too tight to risk losing any money.

Despite knowing that it’s a bad idea, she says “let’s go have some fun in there.” And he, also knowing how bad of an idea it is, says, “Yeah, let’s do that.”

And he uses that misplaced guilt as a club. “Remember what happened the last time you made a decision regarding money? Just shut up and let me control the finances.” And he rules over her.

But she also used that guilt as club to beat herself with. “I’m a failure. I can’t be trusted with financial decisions. Better for me to ask my husband what to do.” And she “turns to him” for decision making.

Let’s Look at The Evidence: Do Marriages Work Better When the Husband Decides?

I think that’s a great illustration of how we’re in the mess we’re in, and what Genesis 3:16–“your desire will be for your husband, and he will rule over you”–has come to be played out. It’s not what God wants; it’s the repercussions of sin!

It’s part of the curse. And Jesus came to reverse the curse!

This week we’ve been talking about emotionally healthy marriages in a variety of ways–how authoritarian views of marriage are toxic; how we can see sex not just from a man’s point of view, but also from a woman’s.

God created male and female to be picture of unity and intimacy. Let’s spur one another on to love and good deeds. Let’s work at knowing and loving each other more deeply every day. Let’s study each other, learn about each other, excel in loving and serving each other. Let’s truly “know” each other, and let’s have that intimacy flow over into passion. That’s what God wants for us, and we need to stop messing it up! What do you think? Have you taken unnecessary shortcuts in your marriage? What’s the real picture of intimacy we should strive for? Let’s talk in the comments!

← Start Your Engines: Your Wife's Not Broken! The PERIOD SERIES: Let's Talk Periods, Going to the Beach, and Teenage Mortification →