Is your daughter prepared for her first period?

And what happens when her first period takes her by surprise?

I’m going to invite Joanna, my co-author of our upcoming The Great Sex Rescue, to share a story of talking through bathroom stalls to a young girl in tears.

When I was a little girl, I loved flying.

Many subsequent trips to airports have stripped me of my exuberant affection for planes… except at Christmas. Carols play over the intercoms, everything is decorated, and the airport population changes from business men to adorable kids bedecked in pajamas and dogs being taken along for the ride.

We were travelling to see my husband’s family for New Years one year, and I was filled with Christmas cheer. Just before boarding, I found myself doing the requisite preflight bathroom run. I sat down in the stall and there was a large floppy dolly on the floor in the stall next to mine. Curious.

I heard a little girl on the phone with her mom. “I think I cut myself, mommy,” she kept saying, as mom tried to reassure her.

I finished in the bathroom and washed my hands. When I was little and we were in public my mom’s rule was that if we ever needed help, we should find another mom. And now I was in the mom squad.

I walked over to the stall door and knocked. “Do you need any help?” I asked, trying to sound reassuring.

Her mother asked her who it was. “Somebody,” she said.

I identified myself as a mom. Nothing from the girl, but the mom on the line seemed interested.

Another woman walked up to me and asked if I had first aid training. I did not, and she did. I happily bowed out and let someone who knew what they were doing step in. Another woman in the bathroom told me she’d been listening longer filled me in on some details: the little girl had gotten her first period and she was travelling with her dad. She was embarrassed and confused and she didn’t want her dad to know what was happening.

The woman with first aid training sprang into gear. She said she had pads in her purse. Another woman had small panty liners. A third had a tampon. And so we created a “stone soup” of period supplies and the woman who knew how to do first aid carefully and kindly talked the little girl through how to put in a pad. One woman in the bathroom knew she was on the same flight as the girl, and so she offered her help while they were flying.

I knew the situation was under control and I had a flight leaving any minute, so I thanked them both and headed back to my gate and my own little girl.

I’ve thought a lot about that interaction in the days since.

On the one hand, it was a beautiful moment of female community springing into action when a little one needed help. I’m proud of that and I think that we need to look out for each other, just as we ended up having a semi-circle of concerned women surrounding a little girl in the stall.

On the other hand, though, what could have been an empowering coming of age moment for this little one was scary.

Her mom wasn’t there, which couldn’t be helped, but she clearly had no sense of what menstruation is or how to deal with it. Since I never saw her, I don’t know how old she was, but from the dolly on the floor, I suspect she was quite young.

And here’s the thing: the start of menstruation is happening younger and younger on average.

There are a lot of risk factors: obesity is a big one. Another is toxic stress, such as that caused by experiencing domestic violence or not having a father figure. There is some evidence that girls are protected from early puberty onset by eating a high-fibre diet. And there may be some other environmental and lifestyle factors as well, but they’re hard to measure and poorly understood.

In general, girls get their periods about a year and a half after breast buds start to form (when the nipples enlarge and start to stick out and breast tissue forms right around the nipples; what we used to call “cone boobs”).

So what can you do as a parent to help keep this kind of story from happening to your little one? You can do what you can to delay its onset by providing her a healthy diet, ensuring she gets enough sleep, has father figures in her life, and developing open lines of communication so that she will confide in you.

The other main takeaway is that you need to have age-appropriate discussions about periods and puberty with your little girl.

The first sign of puberty is breast budding and pubic hair, so if you see those signs early, we’d recommend starting to talk about periods and sending your little one with a pad in her bag so that she’s prepared.

Having those conversations is hard, which is why Sheila, Katie, Rebecca, and Sheldon created The Whole Story. It’s a great launch pad for you to talk through actual practical advice for girls in an age-appropriate way. I especially appreciate that they talk through things like how to swim while on your period. The courses are custom by age and gender and they’re a really great overview. And there’s also an activity where you can make an emergency kit for your daughter with her!

And, of course, the boys’ version helps boys understand what they go through during puberty, and introduces them to periods as well. 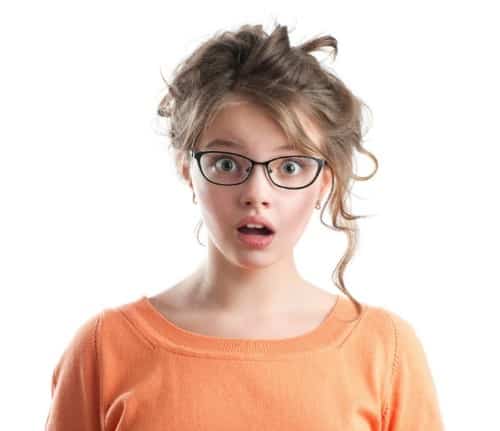 With so many girls getting their first periods at 11, 10, or even 9, we need to be prepared. Were you prepared for your first period? Did you know what was going to happen? Let’s talk in the comments!

Blog Contributor & Co-Author on the upcoming The Great Sex Rescue!