4 Things to Know About Teens, the Media, and God 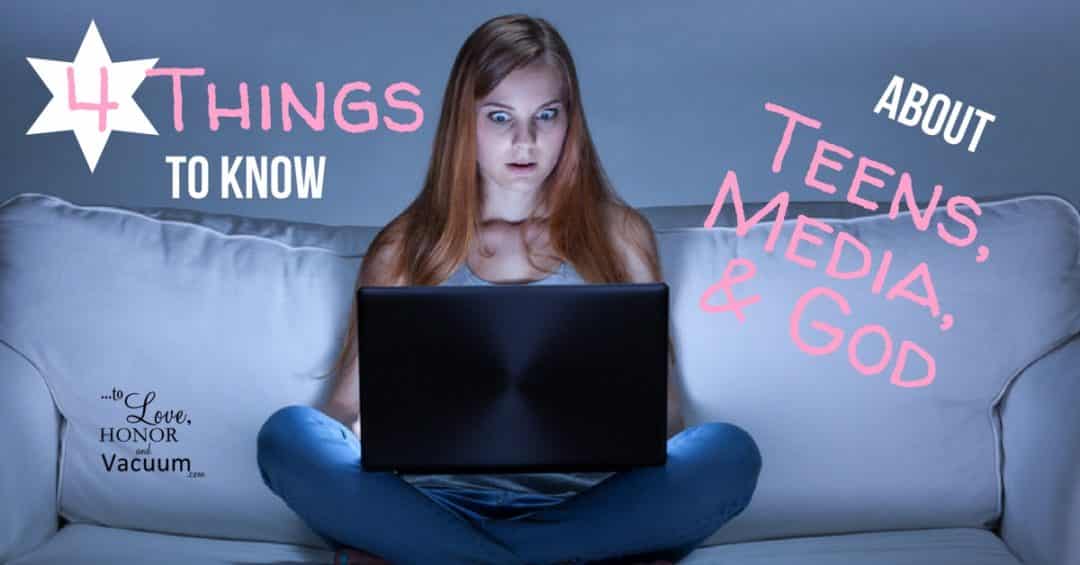 I am not a perfect parent, and I did not raise perfect children.

There. I said it.

And in the spirit of transparency, I’d like to peel back the veil a little bit and let you into some of the more private sides of my life as a parent. It has to do with my daughter and TV shows. It all began with a conversation that I had with my youngest daughter about a month ago, when she was home from university for a few days. She has a YouTube channel which is quite popular (she has almost 10,000 subscribers!), but she also makes two videos a month for the Project Inspired website. And we were brainstorming about possible topics that she could cover.

She decided to do one called “Garbage In, Garbage Out” about being careful with the TV shows and movies that you choose to watch. It really worries her how many of her friends say they are Christian but then think nothing of watching Game of Thrones or Vampire Diaries. I thought it was a great idea. She went and filmed it, sent it in, and then I watched it.

It’s really very good. But in it she said something that I had never known: back when she was 14 or 15 she watched almost the whole first season of Vampire Diaries. I seriously didn’t know. She tells me that the show in first season isn’t as bad as the show is now, from what she’s heard (I know absolutely zero about the show, so I’m not sure what that means entirely), but she laughs about the fact that I didn’t know. She told me, “You never knew everything about Becca and me, Mommy.” (And yes, they still call me Mommy. I like it.)

So I’d like to share 4 Truths that I believe about kids, media, and Christ, in the hopes that it may help us have a more balanced view.

1. You cannot save your child from ALL exposure to media you don’t like–and nor should you

My girls once belonged to a Teen Discussion Group that was looking at the biblical world view vs. the secular world view. They had a video to go along with the discussion, but there was one family who wasn’t allowed to stay for the video portion of the group, because the parents watched all media before they allowed their kids to see it, and the parents hadn’t seen these videos (they were Francis Chan videos on love).

The oldest at the time was 17–moving out in a few years, ready to be on their own. And yet they weren’t allowed to watch a video in a Christian setting that had been vetted by other Christians.

The main problem, though, isn’t just with what your child is missing out on. It’s this idea that ONE exposure or ANY viewing of something inappropriate will scar them for life. If you think that (psychologists call this the all-or-nothing approach), then if your child does inadvertently see something, you give the impression that all hope is lost.

On a side note: My older daughter is turning her blog post about why she didn’t rebel into a book, and one of the points she’s making is a study in a psychology journal that found that while personal devotion to God stopped teens from engaging in risky sexual behaviour, strict conservative rules about the opposite sex actually did the opposite. Kids in families where they had extremely strict rules, like “no hand holding until you’re engaged”, were more likely to engage in risky sex than kids who didn’t have the rules, but who did have Christ. Why? Because of the all-or-nothing thinking–once I’ve messed up a tiny bit, there’s no point in trying anymore. (By the way, a kid could have BOTH strong personal devotion and strong rules, but when the rules were stronger than the devotion–bad combination). All-or-nothing thinking can be very dangerous!

2. You can reduce temptation–you can’t eliminate it

I thought we did everything right–filters on the computer, open door policies in their bedrooms, talked to the kids all the time.

But they still had a secret life that I didn’t know much about. Now, it wasn’t a huge deal. I don’t want to make it sound like they were bad kids, because they weren’t. As teens, it’s normal to do things without your parents knowing. It’s part of separating from your parents.

As a parent, it’s good to do some common sense things, like requiring devices to go in a charging station at 11 at night, or turning off the wifi at night, or, as much as possible, encouraging computer and screen time to be in a central place. But you can’t supervise teens 100% of the time, and nor should you. They need some freedom while they’re still at home to explore. If they have no freedom whatsoever, then when they move out they go from 0% freedom to 100% freedom. That’s too much to take. It’s better to give them more and more freedom under your own roof so that when they do move out, they’re ready.

Since you can’t control your teen, you can’t eliminate all risk of them doing something you don’t like.

3. Your child can have Christ, too

Here’s the main message that I wanted people to hear from me today: Katie knew God, and it was the Holy Spirit who told Katie to stop watching that show.

If your child knows God, then THAT is their main weapon for fighting against the media that we don’t want them to see.

I believe it is far more important that we encourage authentic faith in our children than that we put up more and more control in their lives.

His parents prayed with him, talked with him about it, and installed Covenant Eyes on the computer. His dad got him together with a group of young men who mentored each other and helped keep each other accountable.

He still finds it a temptation, and he’s slipped up a few times, but he’s doing okay.

I am not saying that Christians can’t struggle with this sort of stuff; not at all. But I also believe that our kids’ best weapon for reducing this temptation is the Holy Spirit in their lives. That’s why it’s so important to teach kids to have their own personal relationship with God.

And here’s the other thing about God: He heals. And if your 9-year-old son stumbles on some website he shouldn’t have seen, and gets images inside his head, of course it’s okay to mourn. But God can eliminate the negative impact of those images. He can help your child, as an adult, fight against those images. Yes, it’s a long road for many, but God does wipe things clean.

We serve an active God who can heal and restore.

4. Keep talking about EVERYTHING

My girls and I talk. All the time. Even now that they’re moved out. When they lived at home we went on walks everyday and we just talked about everything.

And I think much of the influence I had on their lives was not because I set rules, but because they could bounce things off of me. They loved me and didn’t want to disappoint me.

Why did my friend’s son feel comfortable knocking on their bedroom door in the middle of the night and asking for help? Because their family talked about stuff. When someone made a mistake they didn’t yell at them; they talked through it and they figured it out. They set up an environment where people know–we all mess up. And we’re here to support you so that all of us can look more and more like Christ.

And God’s grace can be there for your kids, too.

Dear readers, I just want to reiterate that I share this today because I want you all to know that I’m just a regular person. My family is not perfect, and I’ve never claimed it was. We’re just real people, and I so appreciate being able to share my thoughts with you everyday, even as I’m a work in progress myself.

So let me know in the comments, have your kids ever made choices you wish they hadn’t? Or did you do stuff behind your parents’ back when you were in a teenager? How did God bring you back?