6 Ways to Stop Kids from Feeling Disconnected and Lonely It’s podcast day, and I want to talk about the shootings.

Well, I don’t really want to talk about the shootings. But I had a whole lot of different thoughts going through my head from all kinds of different sources, and they all coalesced together into one thought: why are we so disconnected? I didn’t see it being talked about in the news, and I thought rather than talk about gun control and mental illness and political rhetoric (none of which I would want to touch with a ten foot pole) I could bring something else to the conversation–something that has to do with family.

So we had a really interesting conversation, with lots of practical tips!

I hope you’ll listen in, but if not, a quick synopsis is below. And please–remember to subscribe and rate the podcast! It’s really easy to listen on a podcast app on your phone or tablet, so you can take the podcast with you when you’re in the car, or grocery shopping, or on an errand!

Main Segment: Why Are We So Disconnected?

I opened the segment with my train of thought on how we got so disconnected. I had a whole bunch of thoughts that all led to one thing. See if you can follow the logic.

I was sad about:

1. This week was my son’s birthday, which always leaves me sad. I miss him.

2. I watched the movie Otherhood on Netflix.

Not brilliant, but it hammered home the point that many men especially are spending their twenties and thirties without relationships, just living for themselves. These guys needed feminine influence–specifically their moms–but they didn’t even know it.

3. Britain now has a Minister of Loneliness.

4. There’s a huge digital divide in parenting, with lower class kids spending a lot more time on a screen, which is impacting their futures.

5. 22% of Millennials say they have no friends.

Put all these things together and you have young people growing up disconnected from each other, not valuing relationships, and not understanding how important marriage is. Is it any wonder we’re disconnected and lonely?

So I had Rebecca join me and we came up with 6 key things parents can do to help their kids learn both the importance of relationships AND how to navigate complicated relationships.

Because let’s face it: Entertaining ourselves is easy. Relationships are hard. And in today’s culture it’s easier to give in to the entertainment than the relationships. So how do we raise kids who will do the harder thing? Listen in to that segment for our practical thoughts, and leave yours in the comments below, too!

Also, these points factored into our discussions as well:

Are extracurricular activities making your life too busy?

Comment: My wife doesn’t care if she reaches orgasm

My wife and I have been married for over 20 years and the sex life has been just ok. There have been dry spells for sure, but we are getting better as we go. This much I know… she has never had an orgasm, nor does she want to. I have expressed to her my desire for her to experience orgasm, and my desire to help her get there, but it’s met with disinterest on her part. Every time I suggest it, or try to move into position with my hands or whatever, she pulls me and my hands away and says she just wants the intercourse. It’s very discouraging because I think it would only draw us closer and allow for more (sexual) intimacy. It would open up a whole new world for us to explore and enjoy sex the way God intended it. I just can’t wrap my head around someone not being open to the idea of their spouse giving them pleasure, especially to the point of orgasm. How do we get there when she doesn’t want to even talk about it?​

What he’s describing is so common! When we grow up hearing that sex is all about satisfying a man’s needs, we women get very disconnected from our own bodies and don’t realize that we even have a libido or that sex should even feel good. And she could feel very pleased with herself because she’s giving him sex, which is what she’s supposed to do! She may not understand at all that her enthusiasm matters and that most men want more than just someone who will “let them”. Most men want an experience that is mutual (at least good men do). These posts may help us think differently:

Read the Do Not Deprive Series: 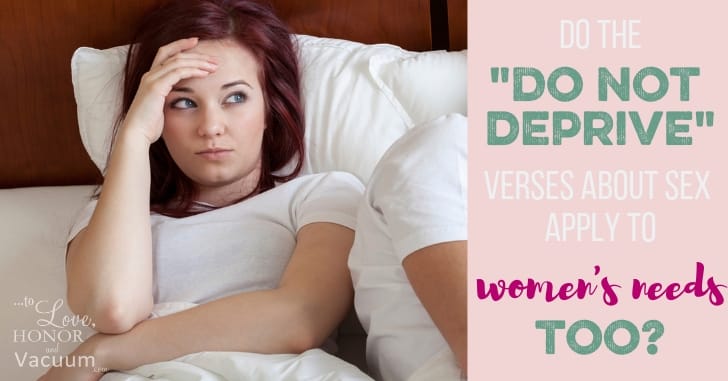 Do Not Deprive: Are Women the Ones More Likely to Be Deprived?

Why We Need a New Definition of Sex

What she likely really needs, though, is to reawaken her libido (or even just realize that she has one, and that that’s okay!) For women in this situation, I’d recommend my Boost Your Libido course. Yes, it sounds like the issue is orgasm, but I think it’s deeper than that for her, if she won’t even try to have an orgasm. It’s about how she sees sex and her own libido, and I hope I can help her think differently about it.

A reader writes with some warnings to everybody:

My husband had an emotional affair and it has been one the most gut-wrenching painful seasons in my life.  I still remember the moment he drove up in the drive way. I was waiting for him to confront him. I knew in my gut he was spending time with another woman.  When I confronted him and he admitted it….I was broken in two.  Our story has been a messy one but we are still together. He had to change jobs as he couldn’t completely break it off.  We are still building a bridge of trust between us and I wonder if that pain will ever go away?  We are both Jesus loving followers and that is the only way we have been able to survive. I guess for me I just want others to know that those flirtations are not harmless and can so easily entangle.  It has made me aware of how I speak to other men.  Please let your readers know it is dangerous territory and to stand firm and renew that mind!  It’s been devastating to us.

To me, this one summarized the whole podcast so well. There’s a lot of pain in the world, and so much of it is preventable if we just take care of the important relationships in our life.

Value people. Value those that God has given you specifically especially. People are the only thing that lasts forever. God wants us caring most about that which is eternal, and in Him we have eternity. So let’s not waste time on that which isn’t important. Just love those you’re with. It really matters!

Now let me know in the comments: Do you find that in your social circle there’s an epidemic of loneliness? How did we get so disconnected and careless? How can we get closer again? What do you think of the ideas we came up with? Let’s talk!