Can We Just Call it a Vagina Already? Talking to Kids about Body Parts I think it’s vitally important to teach kids to use the proper words for body parts, and particularly genitalia.

It decreases shame; it helps them understand their bodies; it can even help prevent sexual abuse.

We’re working really hard behind the scenes at Bare Marriage right now for our book deadline for The Great Sex Rescue, which is due in at Baker Books next Friday. Because of that, I’m not doing a normal “series” in May like I often do. I just didn’t have the time to organize a bunch of epic posts.

Instead, I’m just writing posts off the cuff about things that I’m thinking (and I’m glad the Tiger King one got so much engagement!).

But let me tell you another story about a news item I’ve been following, and how it made me think of the importance of using the real terms for body parts.

I’ve been following a rather sad and depressing story about Cedarville University, and I will try to make this short.

Anthony Moore was a pastor at The Village Church, when it was discovered that he had secretly filmed at least five videos of a young man he was mentoring while that young man was in the shower. When The Village Church learned of this, they fired him and announced that he had a moral failing and was disqualified from ministry. They did not, however, say publicly what that moral failing was to warn others.

Not long after that, Moore was hired by Thomas White, the president of Cedarville University (a Christian university), where Moore eventually worked as a professor, an advisor on diversity, and as a basketball coach. White knew of Moore’s past, and had sent a letter to the trustees explaining he had a five year “restoration” plan for Moore to go through while working at Cedarville.

Bloggers Todd Wilhelm, Julie Roys, and Dee Parsons recently broke this story, pointing out many inconsistencies in White’s description of the events. White fired Moore when this came to light, and the board has now placed White on administrative leave.

Okay, that’s the background. Now we get to what I want to focus on today.

In digging around more information on White, apparently the man ordered all professors to censor what they taught in class so that it fit with Philippians 4:8, and was only pure and good. One professor was shamed for giving a reading that contained a graphic description of child sex abuse. And he told professors that they should not use the correct terms for genitalia, but should instead refer to those areas as “the part of the body below the waist.”

Think about that for a moment. This is a university president telling professors that they cannot say the words “penis” and “vagina” and “vulva” and “foreskin” and “hymen” or whatever other terms you want to use to students who are adults.

And then we wonder why we have a problem with sexual shame in the Christian church.

Let’s be clear: When you aren’t allowed to say words for things, then what you’re saying is, “these things should not be talked about.” Without words, you make it much harder to talk about anything, and so taking away the words takes away the conversation. When you make something off-limits for conversation, then you attach shame to it. You say, “this isn’t appropriate to talk about or think about.” You give the impression that these things are somehow bad or shameful.

I’ve shared before how I was particularly bad at this with my kids. Woo Hoo! Everything You Need to Tell Your Daughter About Sex, Puberty and Growing Up

One day we’re grocery shopping around a holiday, when the parking lot is packed. I’m unpacking the groceries into the car, while the girls are hanging on outside of it. And Rebecca says, in a very loud voice, “Mommy, why do you have hair on your bum and I don’t?”

Other shoppers stared at me and started to snicker. Was I really some werewolf under these mom jeans? Did I really have hair on my backside?

I wasn’t even sure what Rebecca was getting at, until it dawned on me…

I had never given her a word for female genitalia. She didn’t know how to say “vulva” or “vagina”. She just called the whole thing a bum, kind of like a big basketball that extended from the back to the front.

And I had never even realized I was neglecting such a big part of parenting.

I messed up, big time.
And I messed up in a ton of other ways, too (here’s a post on 10 mistakes I made telling my kids about puberty and sex).

The girls and I joke about this a lot, and it was in one of those joking conversations that I dared them to do it better, which is how The Whole Story, our puberty course for moms & daughters and for fathers & sons was born. (Or for single moms and sons!). My girls filmed the videos to tell your girls everything, and then discussion questions and mother-daughter activities invite you to continue those conversations. And our boys’ version features Sheldon Neil from Crossroads TV letting your boys in on The Whole Story, while my sons-in-law Connor and David share their experiences growing up.

And, yes, we use the real words for genitalia.

Plus we’ve got a super low COVID price, since this is an opportune time while you’re stuck at home doing sex ed with your kids to take the course! 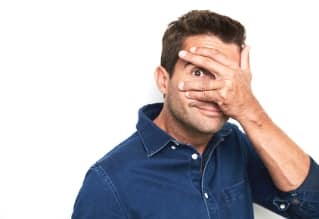 Are you terrified to give your kids “the talk?”

We want to help. So we created The Whole Story: an online video-based course to help parents tell their children about sex, puberty, and growing up.

Let us start those awkward conversations, so you can finish them!

But giving kids the real words for body parts empowers them.

First, it gives them words to use if something bad happens.

They can tell you if anyone tries to touch them inappropriately, because they have words for those body parts, and they don’t feel like they’re somehow invisible or something to be ashamed of.

Second, it helps you talk about things in a matter-of-fact manner

If kids say, “how are girls and boys different?” Being able to say, “you have different body parts. He has a penis and girls have a vagina,” is a lot easier than “He has a ding dong and she has a hoo-haw.”

Or if your children self-stimulate (which many kids do!), it’s easier to talk about: “We don’t touch our penis in front of people,” or “It’s not polite to play with your penis (or your vulva) in front of people.” It’s less shame inducing.

There’s nothing wrong with cutesy words for body parts, too.

It’s okay to use cutesy words as long as the actual terms are also in the kids’ vocabulary. We call toes “little piggies”, but they still know that it’s a toe. So if you call it a “dingle-do”, a “little wean”, a “peenie-pooh”, that’s okay. Just make sure they also know it’s a penis!

Giving kids the real words for body parts empowers them.

Seriously, there’s no reason on earth that university students should not use real words for genitalia.

The fact that in 2020 a university president is forbidding this is such an indictment of modern Christian culture, and we have to resist it. This causes such shame. It makes sexual abuse worse. It pushes problems underground.

God made our bodies beautiful, and that includes your penis, your vagina, your vulva, your clitoris, your foreskin, your frenulum, all of those parts. You were beautifully and wonderfully made. So were your kids. So are Cedarville University students. So let’s not live in shame!

And if you’re still struggling, check out our Sex Ed for Adults post, with stuff that all adults should know. What do you think? What makes it easier to talk about body parts? How do you handle it with your kids? How did you grow up? Let’s talk in the comments! The First Rule of Talking to Your Kids About Sex 10 Mistakes I Made When Giving My Kids “The Talk”