Let’s Make the World a Little Less Scary for Women Do men realize how much women have to be on their guard?

Keith (Sheila’s husband) here at the blog today for some thoughts for the guys.

That routine as well as some other things in my life have caused me to think a lot recently about how much more dangerous this world can be for a woman than for a man. I think we as men often don’t really realize how much fear women have to live with on a daily basis.

Tragically, anticipating and preparing against violence is a reality of life that women have to deal with and – also tragically – that we as men often fail to appreciate.

I did not always understand this.  I vividly remember Sheila teaching me in university about holding your keys in your pocket with each key between the fingers as a defense technique. A punch from that fist would do a lot more damage, she explained.  At first, I filed that away under “tips for if I ever get in a fight” – in the same part of my brain where I put other techniques – setting your stance, punching through your target not at it, how to hold your fist so you don’t break your fingers, etc. I am a bit embarrassed to admit it, but at the time it was an interesting, but entirely theoretical exercise for me – information that may or may not be useful at some point.

It is interesting how perspectives can change, though.  When Sheila and I were dating, at the end of the night I would drop her off at the apartment where she lived with three other young women, then walk back to my dorm room at university. I was a completely love-struck young man and I typically would walk home on cloud nine, quite oblivious to my surroundings.

That night, as I fiddled with me keys in my pocket I realized this kind of walk home in the dark after an enjoyable date would be a very different experience for Sheila.  She could not afford to daydream as I was doing, she would need to stay vigilant. What I had seen as a theoretical exercise was for Sheila anything but that.

Self-defense for women is not a theoretical exercise, but an overwhelming reality of their daily lives.

As a result, I now always think about how I must seem to women on the street if I am out walking at night.  Whereas before it wouldn’t even cross my mind, now I can’t help but think how threatening I must be to a lone woman. I mean, how could she possibly know I was a sensitive, caring father of two daughters and not a potential assailant? Depending on the circumstance, it might mean giving her a friendly, reassuring smile or “hello”, then clearly indicating that my attention is not focused on her. I might call Sheila on the cell phone and talk about things domestic. I might cross to the other side of the street or even take an entirely different route. I could ignore this as her problem, but I choose not to. I think Jesus would want her to feel peace, so I try to bring peace.

I also think back with shock (and disappointment in myself) about the times that Sheila and I parted after a date and each walked home alone. What was I thinking?!? I like to think of myself as caring and thoughtful of others, so why didn’t I just take the extra time to get her home safely those nights, too? To be honest, I think I had just tended to be oblivious to this whole issue before that point. And I daresay I think I am not alone among men. Sheila and Keith just after we were married

For most of us men it is just not on our radar screen the same way it is for a woman because for men – unlike for women – it generally doesn’t have to be.

I learned a bit of what Sheila was going through as a woman that night and I continue to learn. I am on a journey like everybody else, growing and (hopefully) improving as I age.  I must admit, though, that seeing the female perspective on things does not always come naturally for me; I have to train myself to switch perspective.

I have had lots of help with that, though. Having lived with Sheila for almost thirty years and having raised two daughters to adulthood has at times practically forced me to see the world from a woman’s point of view. I had a whole new set of lessons in this area when our daughters left home to go to university. I had never really looked at a neighbourhood through the eyes of ensuring personal safety before.  But thinking about your daughter walking home at night after classes makes you look at a neighbourhood in an entirely different way.  Paternal instinct started kicking in and suddenly I was checking (among other things) how many streetlights there were and how they were placed, something I never would have thought of on my own. Experiences like that have made me more aware of and sensitive to what women go through. I am sure I still have a lot more to learn. 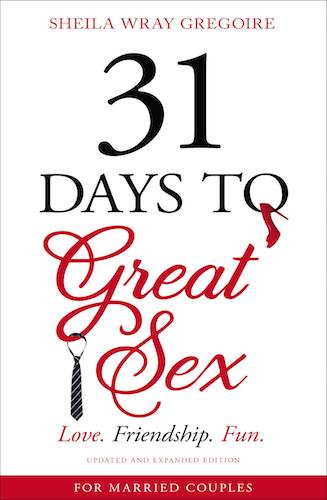 Like you’re on two different planets when it comes to sex in your marriage?

31 Days to Great Sex can help you talk through what’s gone wrong and try some new things to figure out how to make it RIGHT!

Part of the reason I was so clueless may have been that I grew up in a house as one of four brothers and no sisters.  It was testosterone 24-7 with no little sister to bring a different perspective or to say “No fair!” if fights turned physical.  My brothers and I were never mean or nasty to each other, but we certainly were not afraid of asserting ourselves against each other verbally or physically.

In contrast, Sheila grew up in a very female-dominated and rather reserved family, so the first time I stormed out of a room and slammed a door after a fight, she was terrified and she told me so.  I can imagine an alternate universe where I blew that off as her trying to control my emotions (and me!) or where I could have told myself that she was being ridiculous.  She had nothing to be afraid of as I had not – nor ever would – actually hurt her!

But I am so glad I learned about this “Female Fear Factor” beforehand so I took what Sheila said seriously. I don’t want my wife to be afraid of me, I want her to feel I am going to be the one to protect her from everybody else! So I worked on keeping my voice even and not storming out of rooms anymore. It took time and some self-discipline for me to change, but I did it because I want my wife to feel safe around me. Interestingly enough, though, it actually helped me out as well. I have found that when you are focused on how you are speaking, you also tend to focus more on what you are speaking (i.e. fewer regrettable words spoken, fewer misunderstandings due to unclear communication).

I would encourage all men to think about these issues despite (or perhaps because of) the fact that we don’t usually do so naturally.  Maybe a good start start would be talking to your wife tonight about it. Does she worry about these things? How does she deal with it? Don’t be oblivious to these issues the way I used to be. Instead, do your best to understand what she goes through and let that influence how you treat her. How can guys better understand how women feel? If you’re a guy, have you ever had this conversation with your wife? Let’s talk in the comments! ← The Sexual Abuse Questions Podcast: Pointing to Recovery THE ORGASM SERIES: You Are Not Broken if You Can't Reach Orgasm →