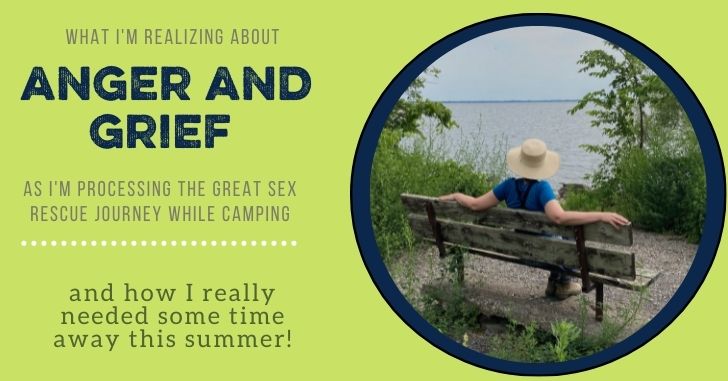 We were supposed to go home from camping last Friday, but we extended for another week because I need it.

“Camping” is perhaps too strong a word. We’re actually sitting quite comfortably in our RV with a fridge, stove, and even an air conditioner, so we’re hardly roughing it (although my showers are only about 45 seconds long).

But we’re right on the water, and we’ve been canoeing and hiking and just enjoying the outdoors. And I’ve been away from where I normally work.

I am online about an hour a day every morning, but that’s it, because I just need some space.

I realized this week that I don’t know how to relax anymore.

But I also wake up every morning preparing to go into battle.

Because every morning I have angry emails and angry comments from people mad that I’m saying that sex should be mutual, or that women matter too. I get people calling me unbiblical for arguing that women’s pleasure matters, and that consent should be a thing in marriage.

Emails about big name authors or leaders who are saying things against The Great Sex Rescue, or who won’t support it, or who believe the exact opposite.

But I actually kind of already knew that.

All year I’ve been aware that my stress levels were too high. That hasn’t really been a revelation.

What I have noticed lately is that anger, what has motivated me for over a year now, often has its root in something else. Something below the surface that is more painful to touch, and so anger is what we erupt in instead.

And as I’ve been walking along the water and in the forest, I’ve realized something.

All my life I’ve felt so very hurt at how the church has treated women. At 16, I had a crisis of faith, where I realized that I loved God, but I couldn’t serve one who genuinely loved boys more than girls. And that was the only thing to conclude if he told girls, “I’ll give you spiritual gifts but then call you sinful for using some of them, simply because you’re a girl.” I couldn’t figure it out. That didn’t square at all with the Jesus I knew. But when I talked to leaders in my church about it, they (the men) treated it like it was strange that a woman would be hurt by this.

Thankfully I have an amazing aunt who showed me how so many verses have often been misinterpreted, and how a complete reading of Scripture shows the worth of women.

I’ve never forgotten that sadness, though.

And it’s the same sadness when I read what so many authors and pastors have said about marriage and sex and women, and how they refuse to recognize that when women get upset about this, we aren’t just rebelling against God. It’s because we’re being asked to accept something that fundamentally isn’t okay.

It’s like we said in The Great Sex Rescue: For so long, women have been told that following Jesus meant accepting things that are simply emotionally damaging.

Accepting things that are just not okay. Accepting that we don’t matter as much.

I’m sad that when I say, “women’s needs matter to God as much as men’s do,” I’m told I’m rebelling and being sinful and leading people away from Christ.

I’m sad that people I respect in the marriage field refuse to see that this kind of thinking is so damaging.

I’m sad at the people I thought were friends who wouldn’t endorse the book because they couldn’t accept that women aren’t responsible for men’s sin, or that men should be expected to lead mentally faithful lives. I’m sad that radio shows that I’ve been on before refused to have me on because they fundamentally disagree with our healing message. They still see sex as a male entitlement.

I know I fight hard, and I speak up a lot, and so I should expect the backlash.

But it still hurts when people say these things. And it still makes me so sad that so many still can’t see women’s worth. That so many still think, at some level, that men’s needs matter more, and marriage should be seen through a male lens, rather than a Christ-centered lens, where Jesus is the point.

I’m sad because the status quo hurts so many, and they think I’m the problem for speaking up. Have they never listened to women talk about sexual abuse in their marriage? Why do we not know the word “vaginsimus”, but we know erectile dysfunction, even though vaginismus affects so many more younger couples than erectile dysfunction, and even though it’s more than twice as high in the evangelical community? Why do we not care about women’s pain?

I know this isn’t making a lot of sense, but I’m not going to edit it a lot because I’m trying to be on vacation this week.

But it’s been a good sad. I needed to let myself feel it, and recognize that anger is not the primary emotion I have. It’s just profound grief for a church that has gone so far off the rails when it comes to sex. And a church which has hurt women so terribly (and men as well) and doesn’t even see this as a crisis. Won’t even recognize that that pain is real.

At the same time, I’m so encouraged every time i see a new review for The Great Sex Rescue on Amazon (there are almost 650 now! And they’re amazing!). I’m so encouraged by the Instagram messages, and the comments here, and the tweets. I really am.

All that to say, I may be a little quiet this week. I’m still just processing. I’ll be back at work next week, but I needed this break.

And so I’ll keep returning to what I know is true:

So anything that is not good that doesn’t lead to wholeness and health isn’t of Him. I don’t need to blame him for it. He’s sad about it too! And He is trying to call couples to wholeness right now. That is his message for this generation. To leave behind the distorted teachings and put Jesus front and center in marriage today, and take husbands off the throne.

Jesus loves men. And Jesus loves women. Jesus wants ALL of us to have life, and have it abundantly. But He never wanted one to have life at the expense of another. That’s not even real life; that’s soul death.

I think I’ve been angry at Jesus a lot in the last year.

Why do so many people who claim His name say such awful things? Spread such awful messages? Endorse and buy such horrible books?

But I’ve been realizing that that was never Jesus. He was always calling the church back. And the church, just like Israel in the Old Testament, disregarded it.

But now there is a big movement, and I do think people are listening. God is raising up the next generation.

And as I’m able to process grief, and realize that it was not Jesus who did all these bad things, I’m hoping that my primary sadness will be replaced by hope. I think it’s coming. I can almost taste it. But I think I need a little more down time to truly feel it.

← Why We Need to Stop Talking about Resolving Conflict in Marriage You've Got to See These "Fixed it for Yous"! →