PODCAST: The Honeymoon Years of Sex (Figuring Things Out!) Getting used to sex in marriage is actually a big transition!

We’re starting our October series on the blog, and I’m really excited about it! We’re talking about the different stages of sex in marriage, and we launched it yesterday with the “Figuring Things Out” stage. I thought I’d do my podcasts this month using reader questions for each stage, so that’s what we jumped in with today.

Question 1: We’re Engaged, but We Don’t Agree with Our Parents’ Boundaries

A reader writes in that she’s engaged, but her parents believe that there should be no physical contact (including hand holding) until the wedding or the wedding night. She and her fiance don’t have the same views as her parents. She writes:

I have grown up in a church culture that really stresses “hands off” courtships, including up until the wedding day (or night). However, my fiancé and I hold a very different view of physical contact, and have set much more lenient boundaries for ourselves. I wouldn’t have many qualms about this, except that I know my parents wouldn’t agree with where we come out on it, to the point where we’ve kept it hidden from them. My parents have a great marriage, and lots of wisdom to give that I want to be open to hearing, and I’m young and still living at home, so I still feel quite a bit of responsibility to follow their wishes. Any advice on figuring out how to balance my own beliefs against my parents’ on this issue?

Dealing with the purity culture is certainly difficult. I do believe that you should wait for marriage for sex; I talked about that at length in The Good Girl’s Guide to Great Sex, too. However, I believe this reader agrees, and she’s just talking about kissing. Listen in to find my (rather funny) guidelines that I used for my girls, but you can also see these posts on the purity culture:

10 Reasons Not to Kiss Dating Good-bye 10 Things That Scare Me About the Purity Culture Is the Purity Culture Making Women Ashamed of their Bodies? Reader Question 2: I Feel Like My Marriage is Failing

Now let’s move in to sex in those first few months! This question is exactly typical of what I wanted to stress about sex in this stage. A woman writes:

I feel like my marriage is in trouble and it’s only been a few months. Our first time having sex was painful and uncomfortable and I’ve been wary of it ever since. It’s gotten to a point where sex doesn’t hurt anymore, but it’s also not pleasurable. We’ll have sex maybe once a week because I’m either not feeling well, or severely depressed. My husband has tried initiating with me and I’ll get started and maybe orgasm, but my orgasm will take so much out of me that I’ll fall asleep. My husband feels hurt by it and I feel like I’m failing him. I wish there was a justifiable reason for him to find someone better than me. He’s been kind and loving toward me, but I just don’t feel like I deserve it. I’ve tried dealing with my depression and finding ways to be a better wife, but I just feel like I keep failing.

My heart breaks for this woman–largely because I was her! I felt like a failure, too. I felt like I was disappointing Keith and everything was awful and it would never get better.

Please, if this is you, listen in to my encouragement! But I just want to stress that this type of thinking only makes everything worse. You’re not supposed to “get” sex right away. For most people it takes a while for things to work like clockwork. If you can consider these first few months and years part of a big research project that will help take you along on your journey, you’ll do so much better. Here are some posts that can help:

Plus don’t forget to work through 31 Days to Great Sex! It’s wonderful for discovering what feels good and talking about the hard things! 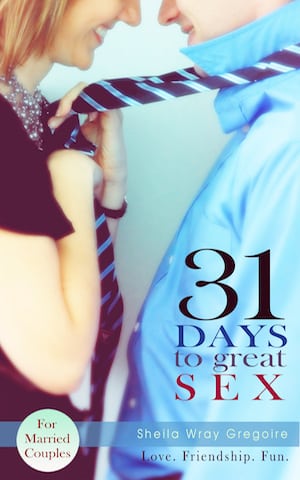 Question 3: Sex tanked once we married, and now he can’t maintain an erection

It’s not only virgins who have a “figuring things out” adjustment. Sometimes even if you’ve had sex before marriage, it doesn’t go as planned afterwards. In fact, one of the most common pieces of feedback I got from my initial surveys for The Good Girl’s Guide to Great Sex was from women who said that sex changed after they married, and often for the worse.

This is a rather long question, but it can be summed up like this:

Keith joined me for this one and we gave a bunch of different things that people in this situation can consider.

Stuff like this, though, does need to be dealt with now. And that’s really the big message I want to give about this stage of sex: Talk about this stuff now. Deal with it. Get help if you need it. Whatever you don’t deal with now becomes such a bigger issue in the next stage, when life gets busy and kids often come. So put in the work and deal with this now!

And now for something completely different. On Monday I wrote a post about what happens when one of you (or both of you) has a crisis of faith that leaves you feeling as if your current church isn’t a safe or healthy place. We had so much great feedback on that post, and so many, many people shared their stories, both here and on social media and through emails.

Sadly, there are such lies here. We cannot reject the clear teaching of scripture just because we do not like it or feel comfortable with it. We don’t need to shop around for a church that makes us feel good. We need to go back to the truth of the Scriptures.

When people say that if you leave a certain church, you’re leaving the truth of Scripture, that church is not a safe place. God wants you to question (just look at how much of the Psalms are people yelling at God!). God praises the Bereans in Acts 17 for looking through the Scriptures to verify what Paul was actually saying. We have no mediator between us and God except Jesus Himself.

If people are telling you that you are wrong to question, that if you disagree with them you’re disagreeing with God (as Emerson Eggerichs said in his horrible blogpost that we analyzed here), that you’re not allowed to think for yourself–well, that is an unhealthy church. Please listen in to my warning (I got rather passionate!), and then check out the post on the 10 signs of a legalistic church. That’s it for today’s podcast! Do you have any thoughts on any of those questions? Let’s talk in the comments!

← The Stages of Sex Series: Figuring Things Out How to Reconnect with Your Body if You're an Abuse Survivor (or Trauma Survivor) →