Finding the Joy of Jesus at the End of the World For almost two years, my mom and my husband had been planning a cruise for the three of us to take to South America and Antarctica.

When we originally booked the cruise, we didn’t know that Rebecca would be having a baby just a few short months before we were supposed to leave for three weeks, or that the cruise would end up happening in the middle of when Rebecca, Joanna and I are trying to write the manuscript for The Great Sex Rescue.
But God knew what He was doing, because I really needed the break.
We arrived back last Sunday, and it was an amazing trip. My husband Keith (an avid birder) saw 173 new species of birds, including these two which I think he caught awesome pictures of: And it was partly a knitting cruise for my mom and me–we went with a group that took us to some amazing yarn shops, including some by women’s collectives (and, yes, I knit that bag I’m holding). And I did a ton of knitting, including this cardigan (that still needs buttons) that I’m hoping will be my comfy, around the house sweater: (By the way, any fellow knitters who are on Ravelry, feel free to friend me! I’m just sheilagregoire).
We started in Buenos Aires, visited Uruguay and Argentina and the Falkland Islands, and cruised around Antarctica, watching whales, penguins, and icebergs for 3 days. 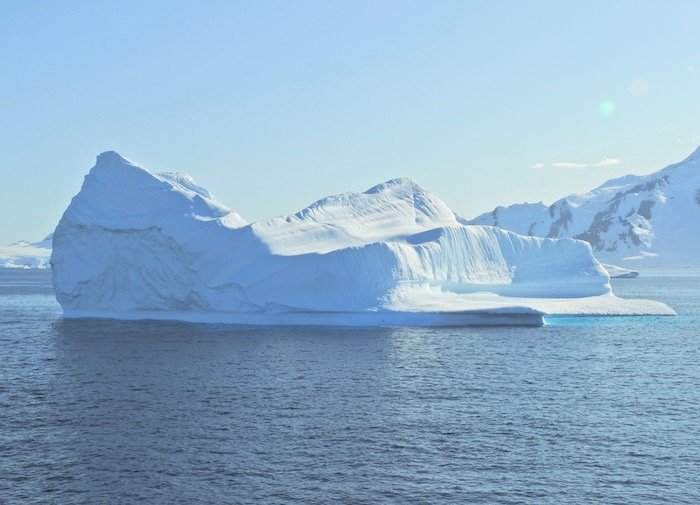 A typical iceberg in Antarctica Yes, that’s a Magellanic Penguin chick right there! (in the Falkland Islands)

Then we visited Ushaia, the southernmost city in the world. (And I knit the socks I’m wearing here, too). Finally, we headed to the fjords of Chile, and then home. In Castro, with the houses on stilts.

It was truly beautiful, and I spent my time reading (including the book The Body Keeps the Score, which I posted about on Monday), knitting, and drafting out several chapters of the Great Sex Rescue.

But mostly I needed to get offline, because it’s been a hard year.

Right before we left we left, Focus on the Family issued a statement in which they deliberately misrepresented me, and said that they found Love & Respect a “biblically sound, empowering message for women” despite my open letter about Love & Respect and Emerson Eggerichs.
The Religion News Service picked up the story, and published a fair and balanced article on the controversy.
But in between talking to the press and posting about this and responding to so many comments and emails, I was spent.
I couldn’t have put it into words, until I had a conversation with Katie while sitting in a port in Chile (it’s amazing how cell phones can get such great reception half a world away!).
For background, my daughter Katie married a military guy that she and Rebecca grew up with and have known for years, and they live in a small town in Ontario. Shortly before they were married two years ago this week (happy anniversary, Katie and David!), Keith and I were speaking at a FamilyLife Canada marriage conference in Niagara Falls, and a couple pulled us aside and told us that they followed my blog, and wanted to invite Katie and David to their church. He was a pastor in that town, and they’d love to have them.
Well, Katie and David walked in and they’ve been there ever since. It’s a small church, but the community is wonderful, and Katie feels as if she’s found a home.
Before that conversation with her pastor, Katie had been to the church that morning for a women’s Bible study, and then she had worship practice afterwards. When she was done, she was wandering the hall, ready to leave, when the pastor came up to her, and they started talking.
And Katie shared many of the things that have been on her heart lately–about how disillusioned she’s been with the same things that have been bothering Rebecca and me about the church; about the way she’s been treated online; about how many YouTube Christian creators are setting up all kinds of legalism about marriage (don’t kiss til you’re married; excessive modesty; excessive wifely submission; etc. etc.). And about how horribly a local church handled sexual assault by a youth pastor.
It’s been tough.
And then her pastor asked a very pastoral question, which was just what Katie needed (and really, just what I needed). He asked,

“When’s the last time you felt the joy of the Lord?”

And Katie was taken aback. She said lately, whenever Christianity comes up, she tenses up, ready to go on the defensive to say, “what that person/church/organization did doesn’t represent the Jesus I know”, or “I don’t believe that way.” Christianity has become a major source of stress, because there’s so much that’s messed up.

And he suggested she try to find the times that she felt joy, and focus on that and do more of that.

I needed that, too. I’m a fighter, and I’m all fired up about the results of our Bare Marriage survey, which so far Joanna (my co-author who is doing all the stats) assures me are showing what we thought they’d show (along with some very interesting statistically significant correlations with vaginismus and sexual pain). I’m excited to write the book. I’m ready to go to bat for men and women who have been taught such horrid things about sex and marriage, and who need to find truth.
But can I also admit that I’m a little sad? Or even a lot sad?
It’s hard when Focus on the Family, an organization I always respected, actually lied about me. How do I process that? How do I process the fact that they ignored what hundreds (or even thousands) of you said to me and in our survey?
And I am hurt. I really am. I’m hurt that they think that I don’t matter. That women who are abused don’t matter. That the only person who matters is Emerson Eggerichs. I’m not just angry. I’m not just fired up. I’m really, really sad.
I’m sad that Christians say this. I’m sad that I find it hard to know who to trust now. And I’m really trying to process all this and hold on to Jesus all I can.
So it was so necessary for me to have three weeks where I wasn’t doing battle. I wasn’t having to respond to anyone. I wasn’t having to defend myself. I could just look at icebergs and at whales and think and pray. I could be quiet, without all the noise. And it was very, well, nice. Really, simply nice.

I didn’t have any great revelations, except that I feel more energized, and I feel like the task before me isn’t too big anymore.

But no matter how bad “Christian” organizations or authors or YouTube people or anyone gets, it doesn’t change who Jesus is.
Sometimes we have to work a little bit harder at finding Christian community that reflects Jesus, and in March I’ve decided I want to make that our series–how can we find that kind of community, like Katie did way up north in her small town? How can we find people who can support us and whom we can support where we can talk about the things that matter? How can we find good community for our kids, and even our husbands? And what should we do if we’re in a toxic community right now?
Because we all need to see Jesus as a person, and not just a cause we need to defend.
It’s too tiring to always be on the defensive. It’s too tiring to always be confronted with those who claim Christ yet act nothing like Him. We need real community around us who can call us back to Jesus.
And I’m glad I called Katie, who shared her pastor’s advice, even while I was at the end of the world.
What do you think? How do you find joy in Jesus when those claiming Christ disappoint you? What does community look like to you? Let’s talk in the comments!

← 7 Things Sexually Confident Women Know Start Your Engines Podcast: On Periods Plus How to Tell if Sex Advice is Good →