Do You Always Have to Put Your Husband Before the Kids? 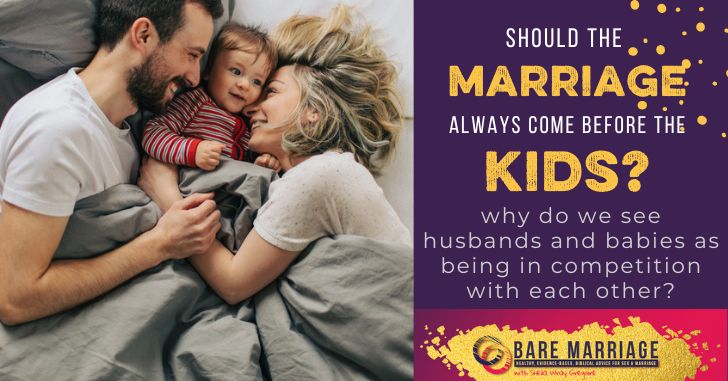 When I was speaking back in the early 2000s, I remember asking women if they were a better wife or a better mother.

Almost everyone put their hands up to “better mother.”

While there is a kernel of truth in that, it’s also a distortion. It pits being married against being a parent, when really they should enhance each other and go together. And the children aren’t just her responsibility; they’re his too. Parenting together should enhance your marriage.

Yes, we can get so busy with the kids that our focus can be off. But there’s an opposite problem: A husband can feel entitled to his wife’s time, attention, and sexual availability, while simultaneously feel entitled to not having to do much with the kids. And thus a husband will feel threatened by the child, and blame this on the wife.

We don’t talk enough about that opposite problem.

We’re in the middle of Marriage Misdiagnosis month on Bare Marriage, where we talk about how evangelical conversations around marriage often diagnose the wrong problem, and thus offer the wrong solutions. Today I want to look at this idea that a husband and a baby are in competition with each other, rather than believing that the husband and the wife should parent and love the baby together.

Here’s an example, with a recent Fixed it For You from Gary Thomas’ book A Lifelong Love (this quote was present in the 2021 updated edition): 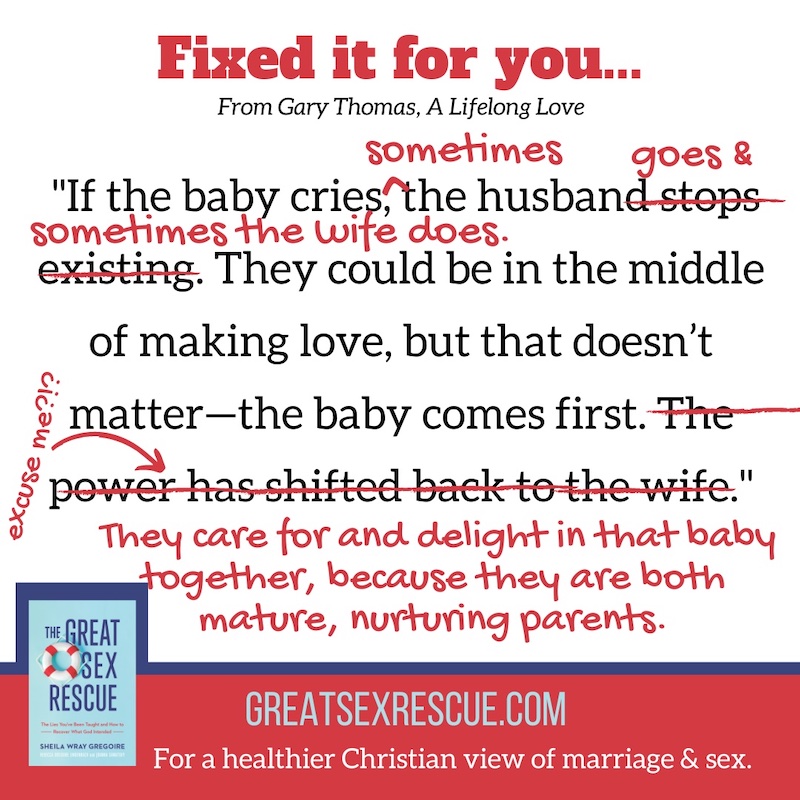 And you can see this on both Instagram and Facebook–the comments are amazing.

The response to this one was swift and outraged.

Notice what he is saying: If the wife tends to a helpless infant’s cries, she is neglecting her husband, and she has power over her husband.

There is only guilt trips thrown at a woman for wanting to tend to her helpless infant in distress, because somehow this is taking away from her relationship with her husband.

In context, it’s even worse.

In the chapter where this quote appears, Gary is talking about power shifts in marriage, and how the power rests with the one who is the least invested in the marriage. He points to different times this can happen, when power shifts back and forth.

But what he is saying is that caring for your infant means you’re less invested in the marriage.

I even praised the book, and shared graphics I made of it on social media!

But I was so used to seeing this theme in Christian books–that the wife spends too much time with the kids, and doesn’t realize how her priorities are being misplaced–that I didn’t even notice this.

And, of course, I used to teach a variation of this, because virtually everyone did. You're telling me WHAT goes WHERE?!

Talking about sex with your kids doesn't always go smoothly.

That's why we created The Whole Story, our online course that walks parents through the tough conversations and does the hard parts for you!

Do we not see that as a huge indictment of the church?

How could we think it’s okay to make the mother of a newborn (and in context, the baby is just 6-7 weeks old) the villain for getting out of bed to tend to a crying infant? Why are we putting that kind of burden on new moms–rather than telling new dads to help with parenting?

Why are we encouraging men to feel neglected when the baby comes?

I’m not going to say much more about this, because I welcome your feedback. But here’s what I wrote in the caption on social media last night:

Every now and then I find a terrible quote from a book that leaves me in shock for a few days.

This was one such quote.

I cannot imagine a man feeling that he stops existing because the wife decides to respond to his baby’s cries.

I cannot imagine a grown, mature man saying that the “power has shifted back to the wife” simply because she cares for his baby–even if they are in the middle of making love.

I cannot imagine a man wanting to continue intercourse when his own baby is crying.

Yes, it’s easy for a parent to get so caught up in the kids they lose sight of their spouse. Yes, we need to keep the marriage alive.

But you know what keeps the marriage alive the most in those first few months? Parenting TOGETHER.

What if HE were to get the baby when the baby is crying? Change the diaper before bringing the baby to the mom to nurse?

What if HE were to focus on responding to the baby’s genuine needs?

What if HE were to understand that women’s bodies were physically made to respond to a baby’s cries–that hearing your child’s cries triggers the letdown reflex, and this is something that God created in women?

If a man sees the baby as a threat to him, then you have to ask if he wanted to be a father at all.

My husband never felt in competition with the babies. On the contrary, our love grew because now we shared a deep, transcendent love for these tiny creatures we created together.

I’m so grateful that Keith didn’t think the babies stole anything from him, but instead understood that he gained so much by having them–just like I did.

I hope Christian books will stop making mothers feel guilty for caring for their infants.

And I hope Christian books will stop infantilizing grown men, and instead expect them to act like responsible adults.

I’m not going to say much more about this, because I like to do shorter posts on Tuesdays (or not post at all), and I’m in the middle of packing for a huge trip Keith and I are leaving on tomorrow! We’re going on my 50th birthday/30th anniversary trip, even though I’m now 52 and we’ve been married for 31 years just about. Everything got delayed with COVID, and now we’re finally leaving.

Follow me on Instagram to see updates! And I’ve got posts and podcasts scheduled which will be coming out when I’m gone.

But for now, I’d love to hear your thoughts about this pressure women feel to not put the baby before the husband! Have you felt pressure to put the kids’ needs on hold? Has parenting and marriage been presented to you as being in competition with each other? Is that the reality in your life? Let’s talk in the comments!

← MARRIAGE MISDIAGNOSIS: Putting Reconciliation Before Rebuilding Trust Why Holding Up Stories of Radical Healing and Forgiveness in Marriage May Backfire →