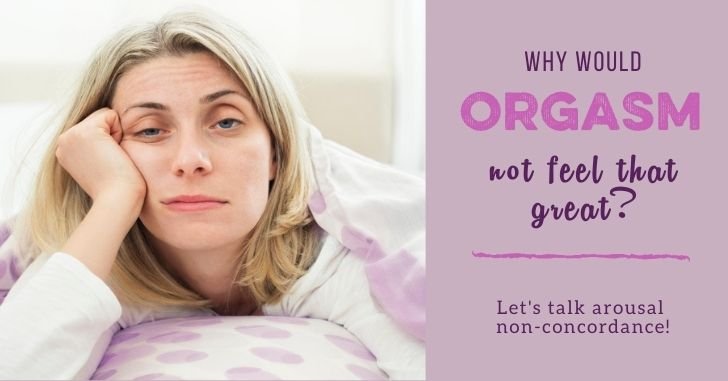 “When I orgasm, it’s okay, but it’s not amazing or anything.”

I’ve heard that from many women in the comments this month, and Keith and I talked about one such reader question on the podcast last Thursday.

I was actually going to launch a new series today on emotional maturity, but I’ve decided to push that back until tomorrow so that I can wrap up the Orgasm Series today. And it’s honestly the best, most comprehensive course we’ve ever made. If orgasm is a struggle, you need to check it out!

We’ve been focusing all month on the problem of women NOT orgasming, but I’d like to grapple with this one before we end.

What if women ARE orgasming, but it’s not that great?

The standard answer may be “well, maybe she only THINKS she’s orgasming,” and there may be something to that. But from the comments that have come in, and the reader questions, it’s pretty clear that women do know what an orgasm feels like and that it is happening. So I’m going to assume that’s not problem.

Why would an orgasm not feel amazing?

I’d like to run down the argument we made in the podcast. Perhaps you all have already listened to it, but I’m worried that some haven’t, and so I want this in writing so that I can point people back to it later.

So let’s go back to first principles.

And your body should be responding, too, by showing the signs of arousal.

That’s ideally how it should work.

But sometimes we can have arousal non-concordance, where the physical and the mental don’t match up.

The classic example, and the one I always want to stress whenever we’re talking about this, is the case of sexual assault.

There is little in life more traumatic and terrifying than sexual assault and sexual abuse.

But what compounds the shame for many victims is that, even though they are being assaulted, they may still feel aroused and even reach orgasm. Because of that, they assume that at some level they must have wanted it.

Nothing can be further from the truth.

During assault or abuse, your responses are heightened. You’re in fight/flight/freeze mode. Different areas of your brain are activated. And that means that you may physically respond because your senses are heightened even if your brain doesn’t want this at all. It’s quite a common phenomenon, actually, and we should talk about it more so that assault victims understand you did not ask for this. You did not want this. This is not your fault.

Physical arousal is not a sign that you actually consented or that you wanted something.

But even at other times, our physical arousal may not match up with our mental arousal.

It is possible to force physical response through sheer will or intense stimulation without the mental desire being there.

When we frequently think about the problem with orgasm, we assume the issue is that the body won’t orgasm, so it must have a body problem. Usually, however, it’s not a body problem but instead a problem with the mental desire component. That’s why we spend three of the five modules in The Orgasm Course talking about elements of getting yourself in a sexy headspace and getting rid of the things that take away the sexy headspace! It’s only in Modules 4 and 5 that we actually get to physical technique (about how to orgasm in general and how to orgasm during intercourse specifically).

But what if there isn’t a body problem, but there still is this mental block where you don’t feel all “sexy sex?” Then orgasms aren’t going to feel that wonderful, because it’s the mental desire part that makes everything stupendous.

Your body is responding, but it’s not responding in context. It’s more like instinct.

Here are two examples of comments or stories from readers where I think that arousal non-concordance is the real story:

Hey Sheila, love your podcasts, youtubes, and books. We been married for almost 40 years and sex has never been great for my wife. I’ve come to terms with it then become frustrated and the cycle continues. Yesterday we had a heart to heart about why she does not enjoy sex. She says that her orgasms don’t feel good to her. I have no answer for that. She can have them as quickly as 3 minutes or take as long as 30 minutes. I rarely can bring her to orgasm by hand. She needs a toy to hep her. My question is why would an orgasm not feel good? She just does not know why either. Can you help.

I have to be on top leaning forward and get contact on my clitoris that way or just use a hand/toy whatever during sex. It’s just another way to get friction and tbh having a penis inside detracts for me.

Can orgasm really be “forced”?

Let me tell you a story. When my daughters were teenagers, they were both lifeguards and swim instructors at the YMCA. It was a running joke among the instructors about how you had to be careful with the little girls and the jets. Girls would position themselves so that the jets hit their vulvas, because it felt good. Rebecca and Katie were constantly being asked by the male swim teachers to come and take a little girl (we’re talking 4-7 years old, typically) away from the jets.

The physical is the culmination of the mental part for most women. Without the mental, it doesn’t feel like much.

And so you can be having sex, and you can still be wondering what all the fuss is about, even after orgasm.

For most women, the problem is learning how to make the body physically respond.

And often it’s the mental desire piece that’s missing. There’s something that’s stopping you from being able to become aroused, or that’s holding you back once you are aroused, and you can only get so far. So unlocking all the mental pieces is crucially important.

But even if you are reaching orgasm, if it doesn’t feel that wonderful, and if you’re spending the entire time almost “willing” yourself to orgasm, rather than being present and just enjoying your husband, you still may be missing an important piece.

Without your body wanting the “sexy sex”, so to speak, then sex doesn’t feel that wonderful. So learning more about mind/body connection, and uncovering how you really feel about sex, and going back to the beginning and figuring out that arousal piece just by making out again, and taking away the expectations of orgasm and just learning to explore–well, those are all things that may open up real sexual pleasure for you.

Orgasms are meant to feel amazing.

Yes, they can be of different intensities, but if they always, always leave you feeling, “meh”, then I’d ask yourself:

And if you are struggling, please check out The Orgasm Course! Going through those first three modules can help you get the mental desire part back. And then working through Modules 4 & 5 can help you reach orgasm while enjoying being with your husband, rather than through sheer will.

The Orgasm Course is Here to Help You Experience Real Passion!

Figure out what’s holding you back. Open the floodgates to orgasm. Tell Me More about It!
I Need that Now!

Arousal non-concordance is more common than we think.

And it shows up differently in different people! Some women will have the desire for sex but not the ability to orgasm; some will orgasm without the real mental desire yet.

But we can put those two pieces together. Don’t give up hope! We’re complex creatures, and we’re made that way to protect ourselves. But when we’re truly able to let go with our husbands, and get rid of all the protective parts and pretences, then sex can be passionate and wonderful!

So if you’re struggling, check out this course! What do you think? Have you ever experienced arousal non-concordance? Let’s talk in the comments!

And don’t forget to check out: