PODCAST: Are You Doing Sex on HARD MODE? Are you making sex harder than it needs to be in your marriage?

We’re in the middle of our doing marriage on hard mode series, and today we’re talking about doing sex on hard mode! (and, yes, I know that’s a double entendre).

Plus I have a big update that wasn’t in the actual podcast below–so listen in and scroll down!

Are We Making “Sex” too Expensive?

Okay, this one was more tongue and cheek, and it’s really an excuse for me to use Economics 101, which I ended up having to take 3 times (!) not because I failed, but because different programs kept requiring it even though I’d already taken it.

But the thrust of the argument is this: Sex has certain “inputs”–you need to have energy; time; a place to have sex; emotional connection; etc. etc. If the “price” of those inputs rises–meaning they’re harder to get–then sex isn’t going to happen as often.

It’s actually Day 27 of 31 Days to Great Sex, and I take you though a quick quiz of the things that can make sex more “expensive” in your marriage. Sometimes when we think of it that way, it becomes easier to work on frequency. It’s not just about deciding to have sex more often, but rather addressing the things that make it harder to have sex! 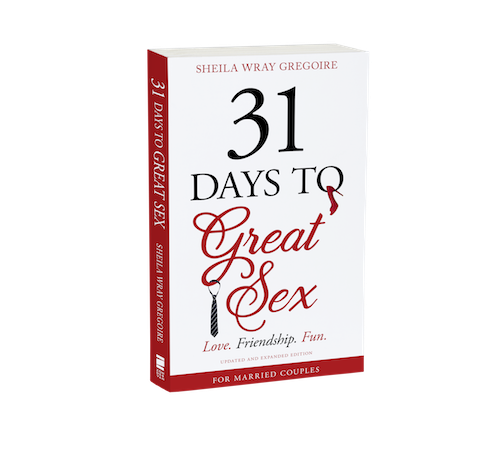 This is dangerous thinking, and we covered these issues:

We talked with Andrew Bauman about this:

Co-Founder & Director of the Christian Counseling Center: For Sexual Health & Trauma (CCC), Andrew J. Bauman is a licensed mental health counselor with a Master of Arts in Counseling Psychology from The Seattle School of Theology & Psychology.

In it, he gives many caveats that sound verbatim from The Great Sex Rescue, which Gary has read, but chose not to cite or give me credit for.

He found having more frequent sex helped him not to relapse.

I know many abuse advocates (some of whom have been on the podcast) who were horrified at this article, because it does not present a proper view of porn’s effects on the spouse. It does not mention betrayal trauma or the pornified view of sex in relation to the anecdote. Though caveats are given repeatedly, the anecdote that the article features blows all the caveats out of the water, and even the conclusion of the article seems to contradict the caveats, leaving the reader confused.

The abuse community has always admired Gary Thomas because they felt that he was one of the evangelical authors that “got it” since he wrote When to Walk Away. They were very, very surprised with this article. (You can see a Facebook Live that Sarah McDugal from Wilderness to Wild and Anne Blythe from Betrayal Trauma Recovery did regarding this article; here’s a shortened version).

Many people expressed this disappointment, confusion and betrayal on Gary’s Facebook page on Friday. They were polite (I saw the comments). Some used emojis, and many pushed back, but it was actually more polite than most debates on my Facebook page. On Saturday morning Gary deleted his Facebook post (though not the blog post) and put up an announcement that a few venemous people had hijacked it and gaslit him (yes, he called survivors venemous).

He claimed that he was the one being gaslighted. To be clear, these are the kinds of comments that he deleted: People were appalled that he had done this, and on Monday night Rebecca and I had a 90 minute conversation with Gary where we tried to help him understand how and why his article missed the mark and why the abuse community was upset. We asked him to consider that their feelings may matter, and that they may have a perspective worth listening to. After that, he did amend his Facebook post so it made reference to venemous “comments” rather than people.

We then recorded this podcast on Tuesday.

We wanted to address this topic to explain why the original article was off base, but we didn’t want to reference the article because we were hoping that he would take it down by the time this podcast went live, and if he did, then we decided we would not talk about it publicly since he had listened to survivors’ pleas.

Instead, the article is still up Thursday morning when my podcast is going live, and this is the comment that Gary has at the bottom of the article right now:

I had thought, when writing this post, that my many caveats about never blaming the wife for a spouse’s sin (which I repeated several times!) would get through, but apparently in telling the true story of one couple’s experience some came away feeling I was still saying precisely that. One couple’s experience isn’t universal, and using this example perhaps took away from the teaching portion where I was trying to make it so clear that I do not, and have not, ever blamed a spouse for their spouse’s addiction.

I’m leaving the blog post up, however, with a slightly altered and hopefully less triggering title, because it has been so misconstrued by others on their blogs and Facebook and I want people to be able to read the original for themselves. Some attackers take a sentence or two out of the blogpost, which I believe is qualified many times over elsewhere in the blog, and portray it as that’s my point—when it’s exactly the opposite of my point! I’m willing to say I wasn’t as clear as I wanted to be—this is a blogpost, not a book—so I still think if someone reads this fairly, without assuming false motives, they’ll get the point. If not, feel free to stop following the blog.

My Spouse Can't Cure Me, but Can Help Me

Deleting all comments is not listening.

Gary has not taken it down, and continues to block people on Facebook who challenge him on it and delete their comments and comment threads. I’m finding this very sad, because Gary was one of the few evangelical male authors who did consider abuse victims’ perspectives. I find it very, very sad that he is refusing to listen.

To repeat, here is the order of events:

And now I am letting you all know what is happening.

Again, I never would have put this in this post had Gary taken the blog post down, and I did my utmost to try to convey that this was the right thing to do.

We hope that with the outcry about this blog post, Gary may reconsider and understand that when people are harmed by teachers, that actually matters.

UPDATE, 2:26 pm Thursday: It looks like, after all the outcry on Facebook after this post came out, Gary has finally decided to do the right thing and take down his post, so the links to it won’t work. I’m glad he’s made this decision; I’m sorry it took so long, and I had hoped it could have been done before having to bring this public. What do you think? Have you known someone affected by the pornographic style of relating? Have you seen betrayal trauma in action? Or do you like economics too? Let’s talk in the comments!

Posts in the Marriage on Hard Mode Series

And SIGN UP for my emails to get our end-of-the-series activity to work through this with your spouse!

← How Do You Feel about Giving "Sexual Favors" While Postpartum/on Your Period? Does it Matter Who is the Primary Breadwinner? →

For the last two Decembers I've had podcasts where I talk about how I felt homeless about church. Obviously part of that was due to COVID, but even before COVID we were trying to figure out a different place to go. We had been really heavily involved in two different...