Reader Question: My Husband Refuses to Talk About Important Stuff 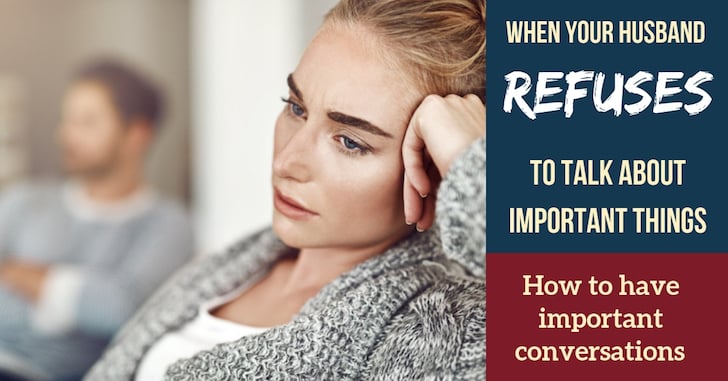 What do you do when your husband refuses to talk about serious marriage issues? 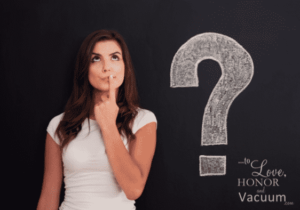 At first glance, this question looks like it’s about sex. It’s actually not. It’s about how we, as wives, can get conversations going about important things when our husbands refuse to talk! But nevertheless, let’s deal with the sex stuff first:

So two quick suggestions: I’ve got a really funny video you can show him in this post on foreplay which can help the conversation. Sometimes humour can get things going, and this is seriously funny!

The second is to work through 31 Days to Great Sex with him. It’s a book I wrote where everyday has a new challenge. You just read and then you do what it says. And that often makes these conversations much easier. When you’re just doing what a book says, it doesn’t feel as vulnerable or scary. And some of the early challenges will help him to understand how to turn you on. Some of the later ones will help you talk about the effects that porn has had on how he sees sex, and how to help sex become more mutual. And the ebook version is only $4.99, so it’s a really cheap way to get things going!

But now I want to talk about the bigger issue that I see in this letter, one that applies to all of us, no matter what the issue is:

Why do we think that if a husband doesn’t want to talk about something, that it therefore won’t get talked about?

I see this dynamic a lot. A woman will want to talk about the finances in her marriage, and he’ll get upset and leave the room, and she’ll feel, “well, he refuses to talk about it, so there’s nothing I can do.”

Or, as in this case, a woman will bring something up, and he’ll get depressed, so she’ll back off, because she doesn’t want to cause discomfort.

Hold on a second.

If something is hurting your marriage, it matters.

If your husband wants to cut off a conversation about something, that does not mean that the conversation stops. It only stops if you let it stop.

And why do we let it stop?

Because ultimately we think that our experience in marriage does not matter as much as his.

Please hear me on this: Precious readers, you matter.

If sex is painful and he doesn’t care, that matters.

If he is angry a lot and yells a lot, that matters.

If you don’t feel safe, that matters.

If he won’t let you know about your financial situation, that matters.

If you simply feel lonely, even if nothing tangible is really wrong, that still matters.

And do you know why it matters? Because you matter.

Jesus loves you. You are precious. And your husband is not more precious than you are.

Now, you aren’t more precious than your husband, either, but God does not want your husband to get all of his needs met and you to get none of yours met.

You matter to God. He sees and He cares.

So why don’t we have these important discussions when our husbands refuse to continue conversations?

Because too often we women don’t feel like we have a right to.

It’s as simple as that.

I’m not saying you should be rude and yell at him. Not at all! But when we understand that we matter, and that intimacy is only attainable when we both feel heard, understood, and accepted, then we won’t allow difficult conversations to be avoided.

Ask yourself: what is the most important thing here?

Yes, he will feel awkwardness and discomfort if you have this conversation. She says that she doesn’t know how to talk about it without him getting depressed. You’re right; he may initially feel depressed.

But why does him feeling depressed stop a conversation that is absolutely vital to have? Why do so many women decide, “it is better for me to have an incredible amount of pain than for him to have some minor pain”?

This is such a huge problem that I have seen over and over again in marriages, and it’s a large part of why I wrote 9 Thoughts That Can Change Your Marriage. About 3 chapters in the book are dedicated to this dynamic where women mistakenly believe that if there’s a problem, we need to fix it all by ourselves or learn to live with it. We try to be peacekeepers rather than peacemakers.

And then what happens?

When we allow him to refuse to talk about an important issue, we lose all hopes at true intimacy.

Here’s another dynamic I have seen: a woman has a legitimate issue in the marriage. If she raises it, he gets angry or depressed, so she backs off. She acts as if everything is all right, because this is her way of respecting and loving him.

He enjoys the marriage because he gets what he wants. But then something happens. The happier he gets, the more resentful she gets. She knows that he doesn’t know her heart. She knows that his happiness is based on a lie.

Outwardly everything is great. But inwardly, she’s becoming more and more miserable. One day that misery will turn into real anger. How could he not love her enough to want to know the real her?

But how did this all get started? Because at the very beginning, she allowed her own feelings to be overlooked.

And so let me say this, loud and clear this morning:

It’s not just about his refusal to talk; it’s also about how we respond to that.

I have known several marriages where the husband walked all over the wife and where the wife was very miserable. Then the wife died, and the husband remarried. And within 6 months the husband had quit drinking, lost some weight, stopped swearing, and had generally become a more pleasant person. In many cases the kids were really resentful: why would Dad clean himself up for her, but not for Mom, who stood by him for so many years?

But the answer is quite simple. The new wife knew what she was worth, and wouldn’t put up with that kind of behaviour.

That’s much easier to do when you’re older (as these new wives were) and much harder when you’re younger. And too often in those first few years of marriage we start really bad patterns of communication that affect the next few decades of our lives. So let’s get this right!

A better way: How to have those difficult conversations, even when he refuses to talk

So pray and ask God to help you to see your husband’s heart and what the issues really are. Help him to prepare your heart and to see yourself with God’s eyes. And then you can say something like this (using the letter writer’s scenario as an example):

I can see that talking about this is making you uncomfortable, and I don’t want you to be sad. But you know what I want more? I want us to feel alive and close and madly in love! I want us to have everything that God wants for our marriage, because I love you so much that I refuse to settle for less.
So if you don’t want to talk about this now, that’s okay. We won’t. But this isn’t going away. And if we don’t talk about it now, we’ll have to talk about it tomorrow, or the day after that. Because it’s important. Our marriage is too important to NOT talk about it.
I love you. I want to have amazing sex with you. I want to feel real passion. But I don’t right now, because I think we’re missing out on the way it’s supposed to be. Sex is supposed to be about us both feeling amazing and feeling love, and right now, I have to tell you, it just feels like I’m being used. And I’m not willing to just be used. I think that will make me resentful in the long run, and it won’t help you to feel loved either.
So I want to make love with you. I want to have tons of sex with you. But I will only do that if we talk about this first and start looking into how to make me feel good. I will no longer have sex again with you until we talk about this. It’s too important, and I’m going to fight for this, because we matter–us together.
And then you follow through.
Maybe it’s time to break that silence and have some uncomfortable conversations.
Fight for your marriage, because, dear reader: You matter.
Please note: if having this kind of conversation could cause you to become unsafe, and if you’re honestly scared of your husband, then you are likely in an abusive marriage and you need to get help. If you feel as if your safety is at risk, please call the police or a local abuse hotline. If you feel as if your husband will get angry or emotionally abuse you, please seek out a good counsellor to help you through confronting him and having these difficult conversations, and perhaps start with this post on emotionally destructive marriages.
Let me know in the comments: Have you ever had to have a difficult conversation? What happened?
I wrote a number of posts to help figure out how to have those difficult conversations with your husband! These may help:

← Making Decisions as a Couple: 4 Questions to Ask 10 Trends in the Purity Culture that I'm Watching →