Can You Forgive? Are All Men Checking You Out, and More! Remember–to access all of the podcasts, you can click on “Podcast” on the menu, or better still, just subscribe on iTunes, Stitcher, or wherever you listen!

Main Segment: Can You Forgive and Move Towards Intimacy Again?

We’ve been talking this month about finding the balance between justice and mercy in marriage, and I thought some of you may need this message on forgiveness and moving past something difficult.

Forgiveness is a hard topic, because we certainly don’t want to rush forgiveness (and far too many of us do that!). And someone who has betrayed you does need to rebuild trust before full reconciliation is possible or advisable. However, at some point, if the person has repented, and has done things to rebuild trust, you need to make that decision to forgive and move on.

I hope this helps some of you dealing with a difficult marriage today!

Here’s one of those scenarios that makes me go, “Oh, man! That was so avoidable!” As I shared in the podcast, I may not be in the majority in terms of marriage advice on this one, but I do not believe that every temptation needs to be shared with your spouse, AS LONG AS you have someone else holding you accountable and you have confessed to someone else. I think you have to look at the bigger picture and ask, “will this help my marriage or hurt my marriage?”

A while ago he confessed to me that he has feelings of attraction for my best friend. He had talked to a mentor about it several months prior, which had taken care of those feelings. However, they resurfaced during a trip we took with this couple. ,,,All of this really devastated me. He insists that he has guarded his thoughts very well, not fantasizing or allowing his thoughts to wander, and that this is a normal thing that many couples face. He doesn’t feel a need to limit our contact with this couple. We talked with some mentors and a Christian counselor about this, and the counselor agreed that there was nothing to be concerned about. He tried to explain the male sex drive to me, and the difference between temptation and sin. …I feel like my normal meter is broken. Sheila, what am I missing? How do I get over the anxiety and pain? How do I thrive in my marriage again?
I’m left wondering–why would he tell her? Why would the counsellor think he should tell her? And now it looks like she is the one with the problem because she can’t get over it!

(She can likely benefit from the forgiveness portion of this podcast, but I’m not sure if she can even do that until the husband and the counselor recognize that he also has to rebuild trust now).

I wrote a bigger post a while ago about 10 things you shouldn’t share with your spouse, and here’s what I said there:

I know a few couples who are super confident and who share everything, and who even keep each other up to date on who they think is hot at church, so their spouse can hold them accountable.

So perhaps some marriages can get away with this.

But in general, it’s not a good idea to tell your spouse you think someone else is attractive.

I had a newlywed friend years ago who called me in tears because her husband confided in her that he didn’t find her as attractive as her sister. He wasn’t lusting after her sister or spending extra time with her or talking to her secretly. They barely knew each other and didn’t even live close, and she was much too young for him. This was just him matter-of-factly telling his young bride that she wasn’t as pretty. It killed her self-confidence.

She goes on to explain that this young man just wanted to start marriage right by being 100% honest and preventing problems before they occurred. But in this case, it just caused more problems when an affair with the sister wasn’t even a real threat.

Besides, talking about lust or finding someone else attractive just feeds those feelings. Keep your eyes on your spouse. If you notice someone else, instead of mentioning it, why don’t you take that moment to kiss your spouse and fill your mind with all the things you love about your spouse?

I have more I’ll say about this in just a minute, because in the comments section I talked about something similar!

Comment: Do We Know the Effect on Women When We Keep Talking about how All Men Lust?

I like to share a comment that someone has made on social media or the blog each week, and this one came out of a Facebook status. I was talking about how sometimes we’ll read things about how all men lust, and it’s important that women not become paranoid. If your husband has not given you reason to think he lusts, then it’s okay to trust him. Pray that God will reveal to you if you ever need to know anything, but remember that your husband honestly could be a good guy.

You can read it here!

Yes, some men struggle with lust. BUT NOT ALL MEN DO. If you have never had any reason to doubt your husband, then don'…

And then Alice left these comments (I’ll combine them here):

(and then replying to the idea that lust is just a sin, and all people sin):

I get what you’re saying about sin, and everybody in a church being on a level playing field with God. But please try to put yourself in my (or someone like me) place. If I’m standing around chatting after the weekly church service, and I stop to say hi to the pastor, or a guy who’s in my husband’s small group, or whoever. I’m standing there with my 15-year-old daughter by my side. I do not feel threatened by a man who struggles with the sin of gluttony. But I do feel threatened by the thought that there’s a 70% chance I’m talking to a guy who uses porn. I just do. Because I know that it is eroding his ability to see me and my daughter as human beings.

We simply need to change the language around this. When we say so loudly “all men lust” and “it’s every man’s battle”, we end up normalizing lust, which the Bible does not do. The Bible says that men who live by the Spirit should not lust. So we should start calling out this idea that it’s a sin that can’t be defeated.

Besides, all men don’t lust. Even if 70% of men say they lust, that means that 30% don’t. When we treat lust like it’s universal, then guys don’t think they can fight against it.

But it is not universal. And I want you wives especially to know that your husband can and should defeat this. God does not say that lust is the only thing a man will always struggle with.

Here’s a few posts from a series that I wrote on this a while ago that may help: 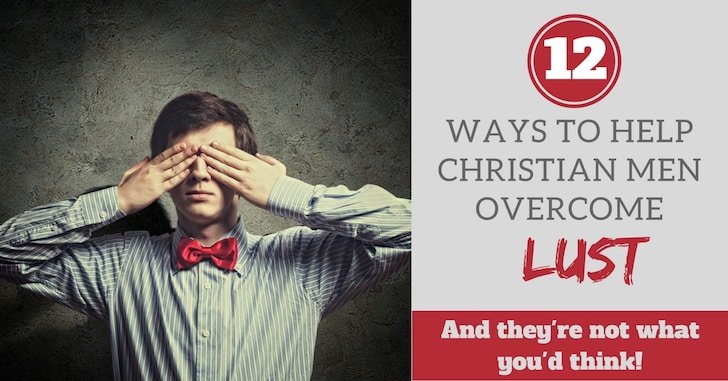 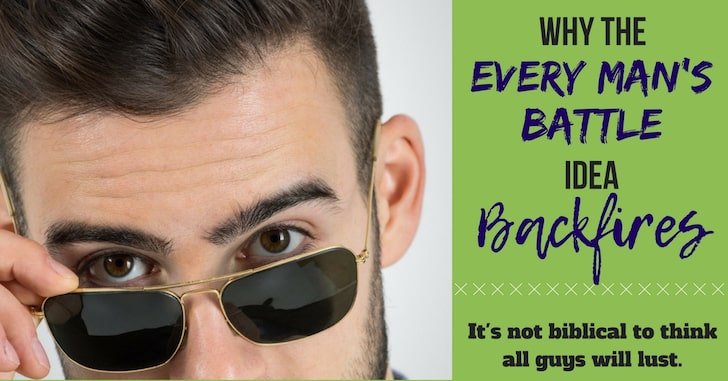 Why Every Man’s Battle Backfires

One more thing: Noticing is Not Lusting

I think I’ll write a whole post about this sometime, but one of the commonalities I see between the reader question and the comment is that too often I think we equate noticing a woman is attractive with lusting after her. I’ve seen that in the studies that measure lust as well. If you look at the wording in many of these surveys, my husband would likely be in the category of “man who struggles with lust”, even though he doesn’t, because the surveys equate noticing a beautiful woman with lusting.

If we tell teenage boys that noticing = temptation and they have to guard against temptation, they’re going to think they’re being tempted constantly. You can notice someone is attractive and then do absolutely nothing at all with that thought. At that point, it’s not even a temptation.

Then he confesses to something that actually isn’t a big deal, but he’s now ruined her confidence.

Maybe if we started talking about this better, we wouldn’t have these statistics floating around that say that 80% of men battle lust. And I think that would be far healthier. Yes, many, many do. And if they are fighting it–then that’s wonderful! But not everybody does, which is also good news, because it means that those fighting it can get over it.

Does that make sense? What do you think? Let’s talk in the comments!

PS: I didn’t do a millennial marriage segment this week because I was pressed for time. My cousin was visiting with her daughter, and I took them to visit Tammy (who works on the blog) and who currently has 11 border collie puppies at her house. Here are two pictures from yesterday! So let’s talk! Is forgiveness too hard? Is noticing the same as lusting? Should we confess being attracted to someone else to our spouse? I’d love to hear what you think!

← Happy Couples Sweat the Small Stuff Part 2: Ask for Help! Should You Aim for Arousal, Not Sex? →