Why is Focus on the Family Supporting Pressuring Wives to Send Nude Pictures? 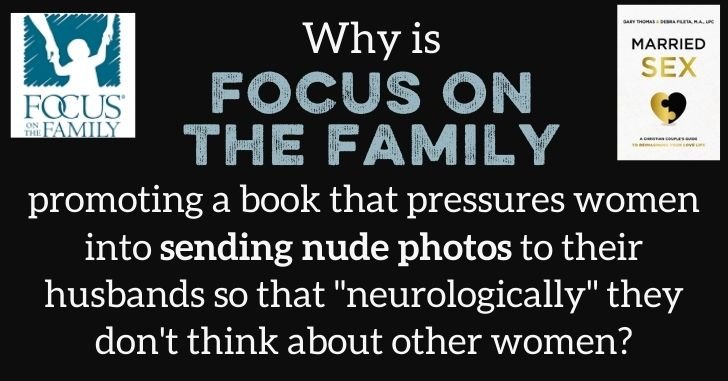 Yesterday Focus on the Family had Gary Thomas and Debra Fileta promoting their book Married Sex, and I’m just depressed.

On Fridays I usually do a round-up of social media for the week, but I was awake so much last night in turmoil about this.

At some point we need to make it stop. This can’t go on.

I posted this last night: And I just have to talk about this, because this is serious.

I’ve written a thorough book review of Married Sex, and much of it is actually okay, but a lot of it is bizarre, some of it is harmful, and then there are the parts like this that are just plain dangerous.

Lots of people listen to Focus on the Family, and apparently Gary Thomas and Debra Fileta sounded good and healthy. So now people will buy their book, and they’ll read the passages pressuring women to send nude photos, and then they’ll feel guilty and ashamed if they don’t want to, or abusive husbands will use this to pressure wives.

So let me explain the problems with how Gary Thomas talked about sending nude photos in Married Sex.

(and it was in Gary’s chapters, not Debra’s).

We said, if you want to do it there’s no injunction against it, but please be very, very careful because of two things:

These were the two things we stressed, and we never said that anyone SHOULD do it. We simply said it wasn’t wrong, but it was very dangerous, so our approach was, “if you really want to proceed, use caution.”

Sight can be used to create sexual excitement even when you’re not together. Abby’s husband, Kyle, loves to receive provocative body shots texted to him. “I’m careful about where I open up any text from Abby,” he says, “and when she sends me a picture in the middle of the day, I can’t wait to get home to her. I’m thinking about her all day.”

Abby was at first reluctant to do this. What changed her mind? “It makes him so happy,” she said. “He works really hard for us, and if I can sweeten his day a little bit, I didn’t want to unnecessarily deny him something as long as God is okay with it.”

Shortly after they got married, Izzy did a boudoir photo shoot for her husband, Scott (the photographer was a woman). Scott calls the photos “awesome” and says they draw him toward Izzy again and again. With those pictures seared in his mind, his sexual interest is centered on Izzy, and neurologically he’s less likely to be drawn to other women.

So let me sum up his argument:

This is coercion. When you have to do something in order to stop someone from sinning against you and doing something bad to you, that is actually a form of coercion.

He is using persuasion tactics on women here to convince them to do it.

Note how he says that Abby was initially reluctant, but then she did it anyway, and now look at how happy her husband was! And look at the wording–she didn’t want to “unnecessarily deny him”. To deny implies that he has a right to this, that this is his due.

So let’s think about two readers.

One is a wife who really is uncomfortable with this.

The other is a husband who wants nude photos while his wife doesn’t.

He’s going to feel emboldened to pressure her for it. “See? Gary thinks this is fine! And he’s a pastor! And he says that neurologically it will help me think about you instead of being tempted by anyone else!” This whole passage smacks of pressure and coercion.

Does the book ever deal with her reluctance? Yes, in a footnote.

It’s not even part of the main text! It says this:

Note that some counselors strongly object to this advice, insisting that it’s too dangerous for a wife to put photos of herself like this anywhere, lest they fall into the wrong hands. There are ways (and apps) to guard against this, but husbands, if your wife isn’t comfortable with this, please don’t pressure her.

Most people will not read this footnote until after they read the two stories about how awesome it is to send nude photos.

But look what the footnote is acknowledging: counselors strongly object, and it could be very dangerous.

Don’t you think it would be good to lead with that? Rather than stick it in a footnote?

And to stick it in a footnote, like it’s not the main thing?

Because the main thing, of course, is that guys get to look at nude photos of reluctant wives. In fact, the whole passage is centered over how much fun he’s having. Abby sends photos so Kyle is raring to go! No mention of how Abby may feel, or how Izzy may feel. They’re not the main characters,  you see.

Plus, like Rebecca said to me when we were talking about this, who is this passage aimed at?

It’s not aimed at people who want to send nude photos, because they’d be doing it anyway, and they don’t need to be convinced! (They just need to be told, like we did, that you need to be careful).

No, it’s aimed at women who don’t want to, and it’s written in such a way to pressure them into it. In fact, later in the book Gary talks about Erica and Timothy, where Timothy starts taking the mental load for the household JUST ON FRIDAYS so that they can have great sex that night. So he will be an engaged partner on one day so that he can get sex, and then things go back to normal.

Anyway, in that passage, Gary writes: “She and Timothy started sharing some text messages and even, on occasion, a photo or two.” So again, he’s normalizing sending nude photos.

When does women’s emotional and physical safety get to matter more than men’s desire to objectify their wives?

Is this really so much to ask?

Where was Zondervan’s editing team when Gary wrote this? Where was Debra?

Do they not care how many women are victimized in this way? Do they think it’s okay to pressure women like this?

And now Focus on the Family is promoting this book which will pressure women into sending nude photos, and some of those women will have those photos used against them.

And Focus on the Family doesn’t care.

It could be that they will never listen. But I believe that you all will.

You all see that this stuff is toxic and wrong and dangerous. And so please speak up. Ask Focus on the Family why they are promoting this book. Comment on their Facebook Page with their recent posts about Married Sex.  If you ever see anyone talk about Married Sex on social media, set them straight. If you’ve read it, or read excerpts, leave a review on Amazon or Goodreads. We can’t stop it from being published. We can’t stop Focus on the Family from promoting toxic stuff. But we can warn others not to buy it. And then hopefully it will just shrink away.

Again, you can read my whole review of Married Sex here.

Also, if you want to change the evangelical conversation about sex, please keep talking about The Great Sex Rescue! And check out our two new books which make AWESOME wedding gifts or shower gifts, and which are awesome for couples starting out or who have been married for a while and want to get this right!

We’ll never be able to stop people from writing and publishing and promoting harmful stuff entirely.

But hopefully we can shrink their numbers to much that their influence is minimal. Are you with me? Do women ever get to matter? What do you think? How should we respond to this? Why does this stuff get promoted? Let’s talk in the comments.

← PODCAST: The ABCs of Arousal and the Sexual Response Cycle Why I Rewrote The Good Girl’s Guide to Great Sex →