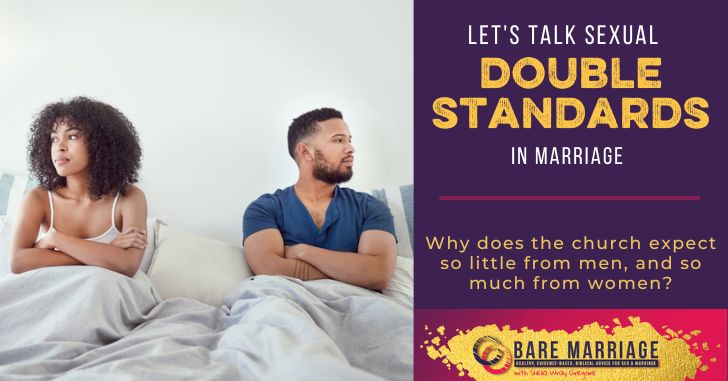 We need to deal with our double standards of sexual expectations in marriage.

This month we’re looking at entitlement in marriage, and how the entitlement mentality can kill a marriage.

One of the things we were talking about last week was that reasonable expectations in marriage are actually good; but when we expect someone to do more than we expect ourselves to do, that veers into entitlement.

Tragically (and it is a tragedy), when it comes to sex, the evangelical world in particular has primed men to have entitlement, while telling women that even reasonable expectations are unrealistic and even sinful. We have created a double standard with sex, which is one of the leading causes of sexual dissatisfaction, women’s low libido, and women’s low orgasm rates (and our 47 point orgasm gap!).

Yes, many women have the higher libido in marriages. But most do not, and when we measured it in our survey of 20,000 women for The Great Sex Rescue, we did find that women’s libidos appear to have been artificially lowered because of a combination of this entitlement/zero expectations double standard mentality.

If we want healthy sex lives, we need to deal with this double standard!

I wrote about this on social media a while ago, but I wanted to put this in a post too so that I’d always be able to find it and point to it, because it’s important. 1. We think it’s unreasonable to ask men to wait for sex after a baby comes so that his wife can heal;

But we think it’s reasonable to ask a woman who has just gone through labor after carrying a baby for nine months; who is not sleeping; who has lost a large volume of blood; who likely has some post-birth physical trauma; who is adjusting to breastfeeding–we think it’s reasonable to ask her to give her husband oral sex or a hand job every few days, and we think she should act enthusiastic about it for his sake, too.

2. We think it’s unreasonable to ask a man to wait for sex to be comfortable for a woman,

But we think it’s reasonable to ask a woman suffering from sexual pain to push through for his sake, because we believe it’s valid that the price of his pleasure is her pain.

3. We think it’s unreasonable to ask a man to connect emotionally with his wife before sex,

4. We think it’s unreasonable to ask a man to make sure his wife orgasms,

But we think it’s reasonable to ask a woman to keep having intercourse and giving sexual favors every few days, even if she never reaches orgasm herself.

5. We think it’s unreasonable to ask a man to go more than a few days without orgasm,

But we think it’s reasonable to ask women to go for decades without orgasm, as long as she’s fulfilling her duty to her husband.

And what if her husband has actually sinned against her or betrayed her?

But we think it’s reasonable to ask a woman who feels betrayed, abandoned, and unsafe to give up her body to the man who hurt her, so that he can have sexual release.

7. We think it’s unreasonable to ask a man who has been raping his wife to take sex off the table while he rebuilds trust,

But we think it’s reasonable to ask a traumatized woman to allow her body to be used, retraumatizing her in the process, because we believe his ejaculation matters more than her safety.

We will never, ever have healthy relationships and healthy marriages in the church until we get this right.

Sex is something that is mutual, intimate, and pleasurable for both. If those conditions are not met, genitals may be involved, but it is not sex the way God intended.

And what’s more, we don’t understand God. By their fruits you will recognize them.

For more on the problems with how we see sex as an entitlement for men and an obligation for women, please see chapters 9 & 10 of The Great Sex Rescue!

do you know your favourite book's healthy sexuality score?

sign up for our newsletter and SEE HOW EVANGELICAL BEST-SELLERS SCORED AGAINST OUR RUBRIC FOR HEALTHY, BIBLICAL, EVIDENCE-BASED TEACHINGS.

(This is not an exhaustive list, but rather just an example of what is sprinkled throughout our resources and from the pulpit)

Kevin Leman in Sheet Music tells women that they should give handjobs while postpartum (p. 206); so does the book Intended for Pleasure (p. 206). Gary Thomas and Debra Fileta in Married Sex implies that women get aroused giving hand jobs postpartum, making this seem like the norm (p. 69-70). Multiple, multiple examples from social media and sermons can be given telling women that they must not go more than 72 hours without giving their husbands sexual release.

Of the 13 evangelical books we looked at for The Great Sex Rescue, only two handled vaginismus appropriately (Sheet Music and The Gift of Sex). The rest didn’t even mention it, or else insinuated it did not exist or wasn’t a big deal (The Act of Marriage and Intended for Pleasure). Tim Keller’s The Meaning of Marriage gave an anecdote where the couple repeatedly had sex when it hurt, and she didn’t speak up during intercourse, but only said so afterwards, implying this was normal (p. 233). Nowhere did they say you should get help if sex hurts. Vaginismus affects 22% of evangelical women. When books tell women about their obligations to give sex, but do not offer caveats about pain, or even tell women that pain is not normal, then it is assumed that these obligations apply to those situations as well.

Multiple books, like For Women Only by Shaunti Feldhahn, insinuate that not having sex with a man is the equivalent to him not talking with you for a week. They say that men connect through sex, and so it is not appropriate to withhold it from him, or else he will feel distant. Many books and authors also say that men will open up emotionally if you have sex, and so if you want him to open up, you must give him sex (I’m afraid I also used to teach this!). When books give no caveat for when women can say no to sex, but simply reinforce how much men need it, they tell women that they should have sex even if they feel distant. Our study found that for 18% of women, their primary emotion after sex is feeling used.

4. Expectations of orgasm and pleasure

As I have pointed out repeatedly, the norm when evangelical books talk about sex is to insist how important it is that women give sex, without also saying that orgasm for women is a thing and that orgasm should be mutual. When we have a 47 point orgasm gap in evangelicalism, and yet this gap is rarely if ever mentioned in our resources, it shows that women’s pleasure is not a priority. For instance, Love & Respect’s sex chapter is all about how women owe husbands sex no matter what, and yet it never says a single word about women’s pleasure. Instead, he tells women that a benefit of sex is that it is over so quickly (p. 252).

Multiple books and authors quote the “72-hour rule” that Dobson put in a book in 1977, based on no scientific evidence. It is found in The Act of Marriage; Sheet Music; Every Man’s Battle; The Power of a Praying Wife. It has been quoted by Carolyn Mahaney at a Desiring God conference. And yet, again, these same books and authors say nothing about women’s expectations of pleasure.

6. Expectations of healing from betrayal

One of the horrifying realities of evangelicalism’s marriage resources is the complete lack of conversation about what consent and coercion look like. Indeed, many of our resources laugh off the reality of marital rape, such as The Act of Marriage (p. 107), Every Heart Restored (p. 15), and His Needs, Her Needs (2011 edition, p. 49), all of which have anecdotes about marital rape but never say that this is bad (and indeed in these anecdotes show sympathy for the husband). When books and pastors don’t define marital rape, but simply say that women must not deprive husbands, then women in these situations feel helpless. And we found that a lot of women are feeling coerced into sex. Can you think of another double standard? What would be your #8? Let’s talk in the comments!

Safety is a prerequisite to intimacy in a marriage. If she feels as if she has to earn safety sexually, with her body, she’ll never have real intimacy.

When your sex life has evaporated, how do you recover? Here’s a 4-point plan to sexual recovery, emphasizing redefining sex and safety.

Redefining Sex: Seeing Sex as an Expression of your Relationship, Not as an Individual Need

If we don't put sex in its proper place, sex will become a drain on the relationship, rather than something that makes you feel closer. We're working this month on how to dig out of the pit you're in with your sex life, because many people have such deep and serious...