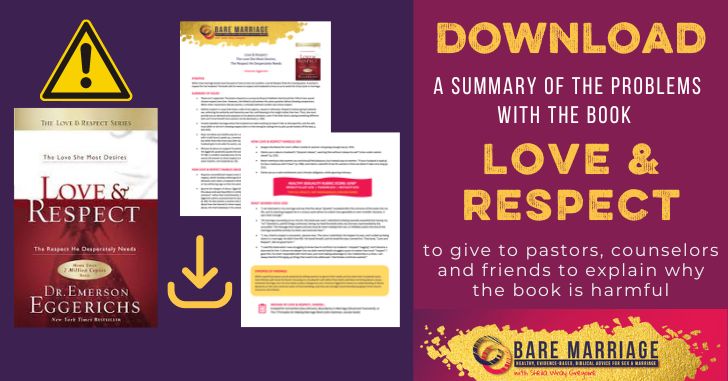 Love and Respect by Emerson Eggerichs is a best-selling, but problematic, book.

Love & Respect is the most-used marriage curriculum in North American churches. It came on our radar in 2019, and when we read it we saw some major problems.

After posting about those problems, we received hundreds of emails from women who said that the book enabled abuse in their marriage, or made the abuse worse. We created a report of our findings and sent it to Focus on the Family (which publishes the book), but they ignored us.

Since then, we have surveyed over 32,000 people to find out which evangelical teachings lower marital and sexual satisfaction, and we are dedicated to calling the church to a more Jesus-centered view of marriage, and a healthier view of sex where it is not a female obligation and male entitlement, but instead something mutual, intimate, and pleasurable for both.

In the course of that research, we created a rubric of healthy sexuality teaching and applied it to evangelical best-sellers. Love & Respect scored the worst of any book we measured–0/48. When we asked open-ended questions on our surveys, asking women what resources they believed made things worse, Love & Respect was the most commonly named resource.

Our findings show that the messages in Love & Respect about marriage and sex can make marRiages worse.

While some may have found the book helpful, when it has hurt many others, it is best to choose a different book. There are other, better books to use that do not leave many of their readers harmed.

While I have written at length about the problems with Love & Respect (and links to other posts can be found at the bottom of this one), many have asked for a summary sheet that they can show others.

This post is our summary of the issues. You can also download the information in this post as a pdf, which can be printed on two sides of one sheet of paper.

A Summary of the Issues with Love & Respect

While most marriage books have focused on how to love one another, Love & Respect finds the missing piece: A woman’s respect for her husband. The book calls for wives to respect and husbands to love so as to avoid the Crazy Cycle in marriage.

What Women Are Saying about Love & Respect

“I can look back in my marriage and see that the abuse *greatly* escalated after the entrance of this book into my life, and its teaching trapped me in a vicious cycle where no matter how agreeable or even invisible I became, it was never enough.”

“At marriage counseling at our church, this book was used. I admitted to feeling sexually assaulted (not having my “no” listened to, painful things continued, having my head forcefully held, etc) and was reprimanded by the counsellor. The message that respect and sex must be never-ending from me, or infidelity and/or the end of the marriage would be entirely my fault, was loud and clear.”

“I, too, tried to respect a narcissistic, abusive man. The more I submitted, the happier he was, and I ended up being alone in a marriage. He didn’t love ME. He loved himself, and he loved the way I served him. That book, “Love and Respect”, did me great harm.”

“I read this book when I was struggling to know how to confront my husband. I stopped “nagging” and I became a doormat for him. It drove me deeper into my dark mental health struggles cause no matter how much “respect” I gave him, he never responded with more love, just more taking advantage of. Our relationship is a mess. I am always fearful of bringing up things that need to be addressed. I feel broken and brain washed.”

These are just a handfull of the testimonies we have received. We have collected over 1000.

While superficial peace can be attained by telling women to ignore their needs and do what their husbands want, real intimacy will never be found. Focusing on a husband’s will rather than God’s will does not bring about a Jesus-centered marriage, but can too easily create a dangerous one. Emerson Eggerichs shows no understanding of abuse dynamics or the very common tactic of love bombing, and thus we strongly recommended purging it from church resources and shelves.

Instead of Love & Respect, Choose: Created for Connection by Sue Johnson 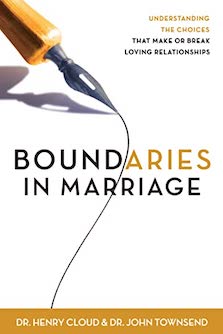 Boundaries in Marriage by Henry Cloud and John Townsend Everything Harmful with Love and Respect Summarized on One Sheet! Do you have someone you want to give this resource to? Do you think it may help people see? What book would you like me to tackle next? Let’s talk in the comments!

Other Posts about the Issues in Love & Respect by Emerson Eggerichs

You will never have a healthy sex life if you don't have autonomy over your own body. You just can't. Unless you are free to say yes or to say no, desire can't build, because desire and obligation are at odds with each other. Just as you can't force someone to love...

When it comes to judging marriage advice, how do we figure out what's right? I've been following Robin on Twitter for a while now, blown away by her really insightful threads. She has a great substack where she writes thoughtful articles, and she's recently done some...

PODCAST: A Deep Dive into Ephesians 5–Why Hierarchy in Marriage Doesn’t Work

A look at Ephesians 5, and how Paul isn’t prescribing hierarchy in marriage. He’s actually showing what mutual submission looks like.